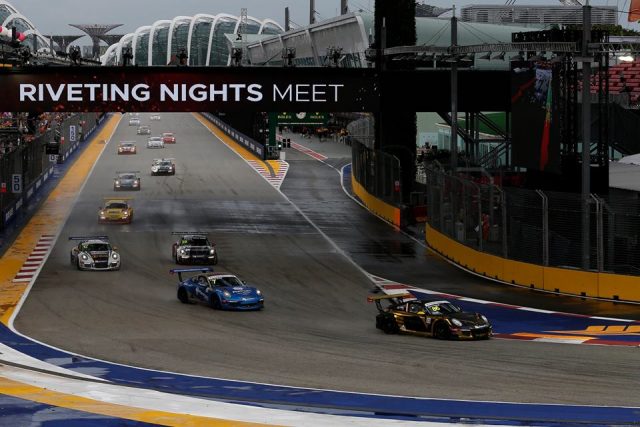 Ragginger leads van der Drift away at the start of the Round 10 race pic: Carrera Cup Asia

Chris van der Drift’s Carrera Cup Asia championship lead has been cut to just a single point after a strange conclusion to Round 9 at the Singapore Formula 1 Grand Prix.

Martin Ragginger was first across the line in the Round 9 race in a tight finish, just beating the New Zealanders van der Drift and Will Bamber as only 0.352s covered those three.

However, none of the three realised they had passed the chequered flag and kept racing, with all issued 30s penalties as a result.

They were thus classified seventh, eighth, and ninth, with Philip Hamprecht awarded the race win.

The top three across the line was the same in the Round 10 race, but this time the results stood.

Ragginger made amends on a wet Marina Bay Street Circuit, leading from lights-to-flag.

Australian Paul Tresidder finished sixth in the Pro-Am class and 16th outright in both races.

Round 11 supports the Malaysian Grand Prix on September 29-October 1. 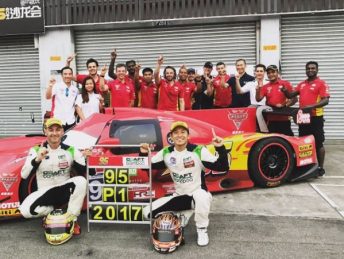 James Winslow has won the drivers’ title and his Craft Bamboo Racing outfit the teams’ title as the inaugural FRD LMP3 Series wrapped up with Round 4 at the Zhuhai International Circuit.

Winslow and co-driver for the weekend Hiroki Yoshida won Saturday’s Opening Race in car #95 while the sister #20 entry of Sydneysider Greg Taylor and Alex Tagliani rounded out the podium.

Tasmanian Josh Burdon and Neric Wei led every single lap of Sunday’s hour-long Feature Race in the #18 KCMG car, but third for Winslow/Yoshida was enough for the Australian-based Brit to be crowned champion.

Burdon/Wei had finished fourth in the Opening Race, while Taylor/Tagliani were retirements from the Feature Race.

Of the New Zealanders, Simon Evans and co-driver Rainey He (#7 PTRS) finished ninth and then fifth, while Andrew Waite and Yann Clairay finished eighth and seventh.