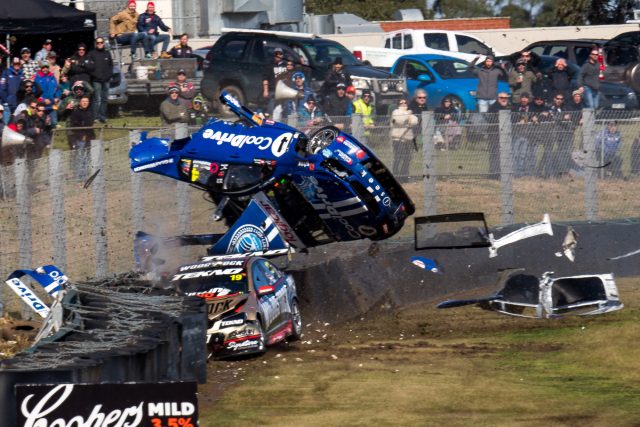 Jonathon Webb has been slapped with a $15,000 fine for causing a spectacular crash involving Todd Hazelwood during Saturday’s co-driver race at the Wilson Security Sandown 500.

Webb locked a brake heading into Turn 6 which resulted in the Tekno Autosports team owner clouting the rear of Hazelwood’s car, sending the pair into the barriers at speed.

Hazelwood was lucky to avoid injury when his Brad Jones Racing Commodore encountered a series of barrel rolls that destroyed the #4 Holden, he was sharing with Tim Blanchard.

Stewards reviewed the incident before deciding to issue Webb a $15,000 fine, of which $7,500 is suspended until the end of the year, for reckless driving.

“Following a DRD investigation and an admission of Reckless Driving by Car #19, Jonathon Webb (making contact with Car #4, Todd Hazelwood at Turn 6), the Stewards imposed a penalty of a fine of $15,000 ($7,500 suspended until 31 December 2017) on Jonathon Webb,” read a report from the stewards.

Webb has accepted the decision of the stewards.

“You never want a fine as a driver,” Webb told Speedcafe.com.

“It is tough on a driver and team owner as I have had to put out a lot of cash to fix the car but as far as consistency for the category I have no complaints.

“It is motorsport, these things happen.”

Click here to view the incident captured in images by Daniel Kalisz.