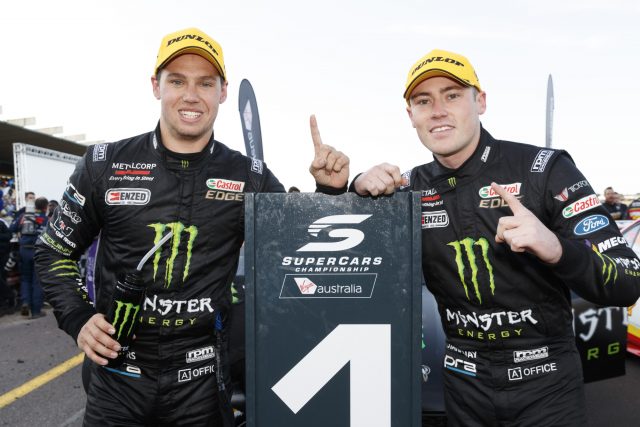 After a opening lap crash provided an hour long suspension, the Prodrive Ford duo controlled a time certain race for large periods, only losing the lead during the pit stop cycle.

Polesitters Waters and Stanaway were challenged by Shell V-Power Racing’s Scott McLaughlin and Alex Premat throughout, but the championship leading Falcon came up just short.

The triumph marked Waters’ first win and podium as a primary Supercars driver and a maiden win for co-driver Stanaway.

The #97 Red Bull Holden of Shane van Gisbergen and Matt Campbell enjoyed a remarkable run from 21st to third with the duo on course for a podium until a puncture late on.

This elevated the #55 Prodrive entry of Chaz Mostert and Steve Owen to third, despite incurring a five-second penalty early in the race.

Triple Eight’s Jamie Whincup and Paul Dumbrell appeared strong contenders for the victory, although a puncture in the second stint forced them to fight back from 23rd to sixth.

The co-driver of the #3 Aaren Russell entry suffered a right front puncture following contact with Ash Walsh, that turned the #75 Brad Jones Racing entry around at Turn 4.

As a result, Douglas was powerless to avoid the barriers at Turn 6 that required extensive repairs under the red flag.

Prior to the red flag, the big movers were Shane van Gisbergen (Red Bull Holden) and Craig Lowndes (TeamVortex) who were the only primary drivers to start the race.

After starting from 21st, van Gisbergen surged to 13th on the opening lap while Lowndes assumed 17th position from 23rd.

Dean Canto in #5 Prodrive Ford was among the losers as he was nudged off the road at Turn 4 by Jack Perkins in the #22 Mobil 1 HSV Racing Commodore.

At the restart, Stanaway streaked into a lead as Premat came under pressure from Dumbrell for second.

Van Gisbergen continued his charge as he surged into the top 10, while team-mate Lowndes pitted early to hand over to co-driver Steven Richards to complete the permitted 54 lap minimum for a co-driver.

Dumbrell soon moved up to second with a move on Premat at Turn 1.

Meanwhile, Steve Owen (#55 Chaz Mostert Ford) was issued a five-second penalty for leaving Luke Youlden with no room when overtaking for fourth at Turn 9.

Van Gisbergen inherited the lead when the front two pitted, before diving into the pits to hand over to co-driver Matt Campbell, as Premat followed the Holden in to pit lane.

An early stop under the Safety Car saw the #75 of Ash Walsh and Tim Slade out of sequence with the field, Walsh holding the lead after the first round of stops from Dumbrell, Stanaway, Premat and Campbell.

However, the complexion of the race changed when Dumbrell suffered a right rear puncture while hassling leader Walsh.

The #88 co-driver dropped a wheel off the road at Turn 1, which may have contributed to the failure.

He dropped to 23rd almost a lap down after ducking into the pits for a replacement tyre.

At the front, Stanaway caught and passed Walsh for the lead, who then took a long stop on lap 40, remaining in the car to complete his required distance.

The critical lap 54 sparked a flurry of pit stops as teams handed over to their primary drivers.

Waters took over the lead from Stanaway in front of McLaughlin, while third-placed Campbell stayed in the #97 in third having yet reached his minimum distance.

Walsh, still out of sequence, held fourth in the #75 BJR entry ahead of Fabian Coulthard (#12 Shell Ford), Chaz Mostert (#55 Prodrive Ford) and the GRM duo of Garth Tander and James Moffat.

Further back, Erebus Motorsport’s challenge unravelled when David Reynolds suffered a right front puncture while sitting just outside of the top 10.

McLaughlin began to close in on Waters after the final stops.

Despite applying pressure throughout the closing stages, the positions remained unchanged until the chequered flag.

Drama struck the #97 when van Gisbergen suffered a right front puncture on lap 106, dropping him from third to 16th at the flag.

As a result, Mostert inherited the final place on the podium.

A solid run throughout saw Garth Tander and James Golding emerge as the top Holden in fourth after a late pass on Coulthard.

James Moffat brought the #34 GRM Holden he shared with Richard Muscat home in seventh ahead of the Lee Holdsworth/Karl Reindler Commodore.

Lucas Dumbrell Motorsport suffered double heartache after being issued with a 30 point penalty and a $5,000 fine after #62 co-driver Alex Davison exited the pits with a loose right rear wheel.

The two LDM cars were the only retirements from the race.