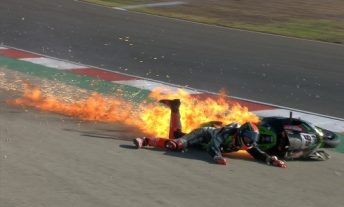 Jonathan Rea has extended his WSBK lead with victory in Race 1 in Portugal as team-mate and nearest rival Tom Sykes withdrew after burning his arm in a practice crash.

Sykes suffered a nasty highside on the run to Turn 9 at Portimao’s Algarve International Circuit during Saturday morning’s FP3, with his factory Kawasaki erupting in flames and burning the Brit’s left arm.

Sykes also suffered a fractured finger and is set to undergo surgery in Barcelona.

“Tom Sykes has a dislocated fracture of the fifth finger on the left hand,” said championship medical director Monica Lazzarotti.

“He will have surgery in Barcelona which the team is managing as his next step in order to stabilise the fracture. We hope he will recover soon.”

In the afternoon’s opening race of the weekend, Rea took a runaway victory from pole position.

Factory Ducati rider Chaz Davies quickly cut through the field after a poor qualifying session that saw him start ninth.

However, Rea was already all but out of sight and there was no further progress for Davies, who remains third in the championship.

Marco Melandri made it two factory Ducatis on the podium, having held out Leon Camier (MV Agusta) at the end.