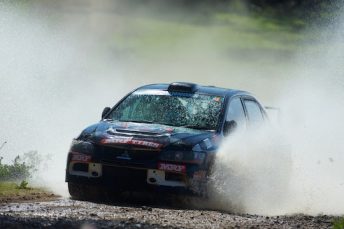 Nathan Quinn on the way to victory at Rally SA. PIC: Ryan Schembri

Quinn and co-driver Ben Searcy dominated the event, taking out both heats, winning 12 of 14 stages and finishing heat two ahead by 46sec.

Subaru do Motorsport’s Molly Taylor was the only one to get close to Quinn, taking two stages on day one. Taylor and co-driver Bill Hayes finished a solid second, the result good enough to give them a 30-point lead in the Australian Rally Championship with one round to go; Quinn moves into second, 35 points clear of Harry Bates.

“I’m stoked. I said that we had to come here and win and it worked out pretty well for us,” Quinn said.

“I’m very happy to finally get a win for the team after rallying for ten years.”

“I’m heading to my home round, I’m sure Harry can confirm that driving in your home event is a lot easier, but Harry and I have a massive job ahead of us to overhaul Molly – hopefully the Coffs Coast Rally Team can come out on top.”

Craig Brooks and Steve Glenney produced a stellar drive to claim third outright, his first ARC podium and a swag of points. The result secures top spot on the ARC2 class point score and a start at the Kennards Hire Rally Australia ARC2 final in November.

Toyota’s Harry Bates and John McCarthy were sidelined for a second day running when the mechanical dramas with the new Yaris AP4 continued. Bates and McCarthy started heat two but completed only one stage before retiring from the event.

In the ARC two-wheel-drive class, Adam Kaplan and Aleshia Penny posted another solid result to take out the class win and now take an unassailable lead in the class championship.

In the ARC2 2WD class Stephen Mee and Lewis Bates did enough to secure their ticket to the ARC final at Rally Australia despite Mee missing the final three stages and Bates making a late retirement with gearbox issues.

Kennards Hire Rally Australia, the final round of the CAMS ARC and the World Rally Championship, will take place in the seaside town of Coffs Harbour on 16-19 November.