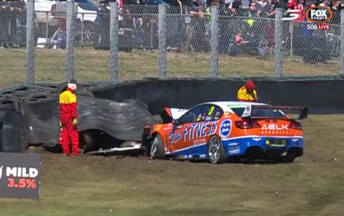 The aftermath of the Taz Douglas crash at Turn 6 pic: Fox Sports

The Wilson Security Sandown 500 has been suspended following a heavy opening lap crash for Taz Douglas.

The Lucas Dumbrell Motorsport driver speared into the barriers at Turn 6 at speed after suffering a right front puncture.

Douglas, at the wheel of the #3 car he shares with Aaren Russell, made contact with Ash Walsh, which resulted in the latter facing the wrong way at Turn 4.

It appears the contact with the #75 Brad Jones Racing entry caused the tyre to go down on the #3, which left Douglas helpless in avoiding the barriers at Turn 6.

“I just got a puncture, similar to what happened to Golding last year – I had no warning and in I went,” Douglas told Speedcafe.com.

“I had a reasonable start, (van Gisbergen) obviously fired down the inside at Turn 2 and pushed me into (Ash Walsh) and I kept getting pushed into him throughout that three/four section and turned Walshy around.

“Everyone says ‘you’re okay’ but you’re still disappointed because of the situation,” he added.

Officials initially called the Safety Car before red flags were shown to recover the car and repair the barriers at Turn 6.

Under the race suspension regulations crews are allowed to work on the cars but are not permitted to re-fuel.

The clash between Douglas and Walsh is due to be reviewed by the stewards post-race.

The incident follows a huge crash for Todd Hazelwood at the corner on Saturday and a similar incident for James Golding that red flagged the race last year.

The race eventually resumed after an delay of almost an hour.