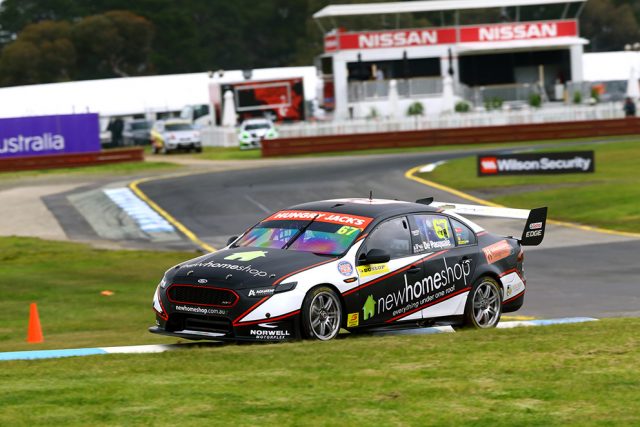 Anton de Pasquale has scored his first Armor All Pole Position in qualifying for Race 2 of the Dunlop Super2 Series at Sandown, despite two offs during the session.

De Pasquale edged Todd Hazelwood out of top spot after the chequered flag, while overnight series leader Paul Dumbrell qualified 11th after his second run was hampered by traffic.

De Pasquale took the #67 Paul Morris Motorsports FGX Falcon off the track at Turn 1 early in his second run, then again at Dandenong Road late in the piece.

However, he managed to regroup to clock a benchmark 1:09.4602s with the clock at zero.

“It was a last lap wonder kind of lap,” said de Pasquale.

“I clipped the wall a bit earlier in the session so it was a (case of) ‘put it all in’ out there.

“The car was really good, we tuned it overnight, so now I have to get it done in the race, but a good start to the day.”

Hazelwood was only 16th after his first run in the #35 Matt Stone Racing VF Commodore but quickly shot to the top in his latter run.

He will start second, on the clean side of the track as he seeks to regain the series lead he lost the day prior.

Dumbrell (#88 Eggleston Motorsport VF Commodore) was on track to better his time when he came across traffic exiting Dandenong Road in the final five minutes.

The series leader pitted that lap and did not reappear.

Jack Perkins could only manage 21st after his program was disrupted by a suspected engine issue in his #4 VF Commodore.

Perkins pitted before setting a time in his first run in order for the Dragon Motor Racing team had to attend to the problem, which turned out to be an oil overfill.