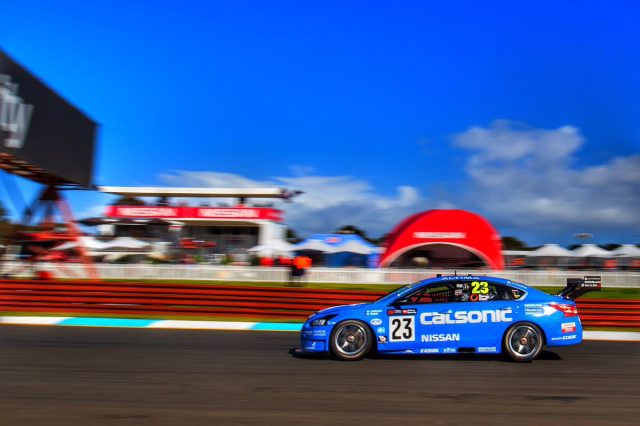 The Calsonic Nissan of Michael Caruso and Dean Fiore topped the times in the final warm-up ahead of the Wilson Security Sandown 500.

Caruso posted a 1:08.860s to top the session with the #23 Altima 0.09s faster than the Red Bull Holden of Shane van Gisbergen and Matt Campbell.

“(It all felt) reasonably okay, obviously we made some changes overnight,” said Caruso.

“If it was qualifying and that was what we needed to do today, but look 500 kilometres is a long way to go.

“It is good to feel that the car is there and you know, obviously it is going to come down to a lot more than having a fast car for one lap.”

The #88 Triple Eight Holden was third fastest with Jamie Whincup setting the time in the car he is sharing with Paul Dumbrell.

The session was not without incident with Prodrive’s Cameron Waters and Shell V-Power Racing’s Fabian Coulthard involved in a feisty dice.

Pole sitters Waters and Richie Stanaway ended the hit out in seventh, while Coulthard and co-driver Tony D’Alberto was tenth behind DJR Team Penske team-mates Scott McLaughlin and Alex Premat.

Stewards will also investigate an unsafe release in the pitlane that saw Karl Reindler (#18 Preston Erection) and Macauley Jones (#8 Brad Jones Racing ) collide while trying to rejoin the fast lane.

“We were out there scrubbing some tyres, came in for a new set of tyres, left our pit box and he just basically got released into me, into the side for a bit of a traffic jam in pit lane,” said Reindler.

“I suppose it could happen to anyone, it is not the type of thing you want to happen in the race so it is something I guess we will keep an eye out on.

“There was nothing I could do, I couldn’t roll out of it any sooner which you would do, if you could. I am not sure if it was Nick or Macca in the car, but ah yeah a bit of awkwardness in pit lane.”