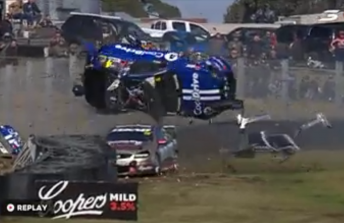 Todd Hazelwood walked away from this horrific crash

However, the race was brought to a premature end following a spectacular crash for Hazelwood in the #4 Brad Jones Racing entry on the penultimate lap.

Tekno Autosports’ Jonathon Webb appeared to suffer a lock up which resulted in contact with Hazelwood at Turn 6, that sent the car backwards into the barriers at speed.

The car launched into the air before encountering a series of barrel rolls before coming to a rest.

Such was the severity of the impact the roof and several body panels were ripped off the chassis.

Hazelwood managed to climb from the wreckage under his own power.

“It is not an easy thing to stand there and watch. I mean, it is a huge accident,” said a clearly upset Brad Jones.

“I think it is pretty simple to see what happened. That is unfortunate, that is a very fast part of the race track.

“You know, its a 20 lap co-driver race, a bit opportunistic to be driving into a hole that really wasn’t there.

“It is unfortunate, a lot of damage, thankfully Todd is fine but you know, I don’t think the car will be very good.

“I feel like that is probably one that could have been avoided pretty easily, but you know that is racing.

“We will get the car back, we will strip it off and have a bit of a look at it. But that is as bad of an accident as I’ve seen.”

Prior to the red flags, Youlden had made no mistakes from pole as he led the field into Turn 1 with Premat following suit.

Once into his rhythm the experienced co-driver leapt into a confutable 1.5s lead from Premat while Richie Stanaway joined breakaway of three at the front.

Youlden’s lead was cut to 0.6s as Premat upped his challenge by the halfway mark of the race.

Stanaway went with Premat before passing the Frenchman at Turn 1 in the latter stages of the race for second.

After losing out to Stanaway at the start, Canto brought the Ford home in fourth.

Paul Dumbrell in the #88 Red Bull Holden endured an eventful race to fifth ahead of Steve Owen.

The race proved to be a disaster for Shane van Gisbergen’s #97 Red Bull Holden with Matt Cambell at the wheel.

Starting from 16th, Campbell made a slow start and was then tagged into a spin at Turn 4 by Lucas Dumbrell Motorsport’s Taz Douglas.

The incident was investigated by the stewards.

The primary drivers will take over the cars for the second Race to the Grid encounter (1615 AEST), which will determine the starting order for Sunday’s 500km race.