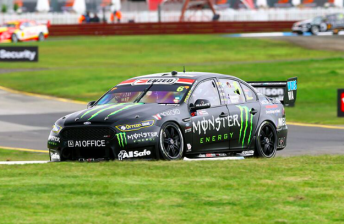 Cameron Waters has claimed the Armor All pole position for Sunday’s Wilson Security Sandown 500 after taking victory in the second Race to the Grid heat.

The former Dunlop Super2 Series winner made the most of a stellar start from third to take control of the race in the #6 Prodrive Ford, which he is sharing with Kiwi Richie Stanaway.

Waters was shadowed throughout by championship leader Scott McLaughlin in the #17 Shell Ford.

However, the Monster Energy backed driver held his nerve to take the race win and claim his second career Supercars pole.

McLaughlin and co-driver Alex Premat will start alongside the Ford after finishing second, while the David Reynolds/Luke Youlden Erebus Motorsport entry secured third.

Waters produced a stunning getaway from the line that allowed him to dive down the inside of David Reynolds and Scott McLaughlin to take the lead at Turn 1.

Jamie Whincup moved up to fourth ahead of Fabian Coulthard, while Dale Wood jumped up to sixth from ninth on the grid.

Meanwhile, smoke began to pour from Craig Lowndes’ Triple Eight Holden which eventually resulted in a retirement on lap 6 due to a power steering issue.

A hard charging Jamie Whincup finished fourth to claim a second row starting berth for the #88 Red Holden, that he will drive alongside Paul Dumbrell.

Whincup tried to pass Reynolds on the final lap but was unable to make the move stick.

After dropping to eighth, Chaz Mostert produced an impressive recovery drive to claim fifth and a place on the third row for he and Steve Owen.

Title contender Shane van Gisbergen will start Sunday’s race from 19th on the grid in the #97 Red Bull Holden.

Meanwhile, Jason Bright was unable to take the start in his #56 Prodrive Falcon after a starter motor problem.

The entry returned to the fray two laps into the race before going on to finish in 23rd spot.

Tekno Autosports’ entry for Will Davison and Jonathon Webb was absent from the grid along with the #4 Brad Jones Racing Holden for Tim Blanchard and Todd Hazelwood, following a huge crash in the earlier co-driver race.