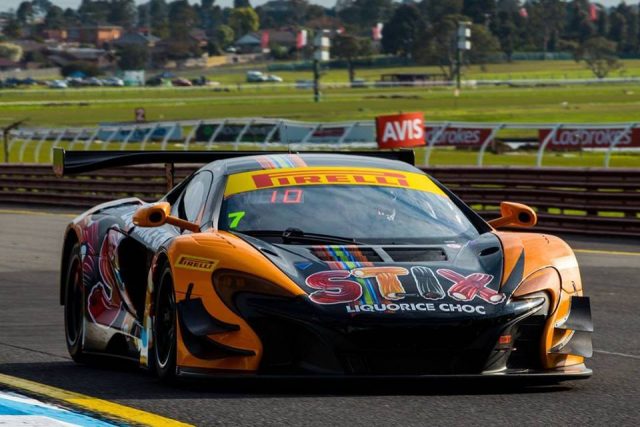 Geoff Emery will take the Australian GT Championship lead into this afternoon’s final race of the season after Liam Talbot spun in Race 2 at Sandown.

Tony Quinn (#7 Darrell Lea McLaren 650S) was classified the winner of a dramatic race in which Ash Walsh was first across the line but slapped with multiple post-race penalties.

The race was barely a lap old when the Safety Car was called for a stranded Ash Samadi.

The #3 Ash Samadi Racing Audi R8 got loose under brakes at Turn 2 just after the start, slipping onto the saturated infield and gliding all the way to the fence.

Fraser Ross, who got the jump at the start, had control of the field for the first restart but Talbot got underneath into Turn 1.

However, the long-time championship leader ran deep and straddled the exit kerb, tipping the #911 Walkinshaw Racing Porsche 911 GT3-R into a spin, with Talbot coming to rest against the inside fence.

Emery drove past Ross before the yellows were called, the latter’s #58 McElrea Racing McLaren appearing to struggle for speed.

All 10 surviving cars, including Talbot once he had been towed out of the mud, took their compulsory pit stop under Safety Car.

Walsh, who already had a five second penalty incurred by co-driver Duvashen Padayachee for a start infringement hanging over his head, began to make progress.

He had climbed to fifth when Twigg gave away another position by spinning at the final complex on Lap 13, scraping Walsh as his #8 Scott Taylor Motorsport Mercedes-AMG GT gyrated.

While the clash pulled a diveplane off the #44 Supabarn Audi R8, Walsh appeared unperturbed when he lowered the fastest lap next time around.

The Brad Jones Racing Supercars co-driver picked off McLaughlan and then Quinn shortly after, before setting off for Griffith.

He closed right up with about seven minutes remaining, but by now had a 10 second post-race penalty to serve due to a restart infringement.

Griffith managed to keep Walsh behind for four laps, but pinched a brake and spun at Dandenong Road, dropping to ninth, the last of those on the lead lap.

Walsh pulled away as a result, setting the fastest lap again on Lap 24, but had only put 7.6s between he and Quinn by the time he passed the chequered flag.

Quinn’s efforts to keep Emery behind him thus proved crucial in the final outcome, which was a first win this season for the championship owner.

The top 10 was rounded out by Ross, Ryan Millier/Manolios, Twigg, Griffith, and Talbot.

The Australian GT Championship will be decided with one more 40-minute race this afternoon at 1710 local time/AEST.