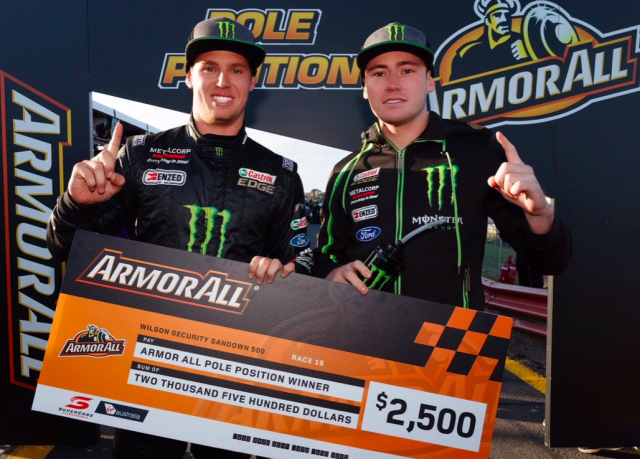 Richie Stanaway has given his clearest indication yet that he is set to land a full-time drive in Supercars next season.

The New Zealander once again showcased his potential by helping Prodrive claim pole position for the Wilson Security Sandown 500 alongside Cameron Waters.

Stanaway set up the pole position by progressing from sixth to third in the co-driver race before Waters took out the primary driver heat to secure pole for Sunday’s race.

Having turned his back on Europe, the former GP2, GP3 and FIA WEC race winner has made his intentions of stepping up to Supercars clear.

Stanaway already holds a contract to continue as a co-driver for Prodrive next season, but the 25-year-old believes a full-time drive in the series is in the offing for 2018.

“I would say it is a pretty good chance,” said Stanaway when asked about his full-time chances next year.

“It is just a matter of time, just waiting to see what materialises, but I am pretty confident for getting a seat next year but I can’t really say much more on that.”

However, his options remain unclear at this stage with Prodrive currently occupying a full four car stable for next season.

REC owner and driver Jason Bright is keen to continue in the fourth entry at the Melbourne squad.

Stanaway has been linked to a move to Lucas Dumbrell Motorsport this week, who is assessing the possibility of switching to Prodrive built Falcons next year.

Prodrive boss Tim Edwards remains tight-lipped on Stanaway’s future but says he expects the driver to be co-driving for the outfit next year.

“We have got an agreement with Richie to do co-driving for us next year,” Edwards told Speedcafe.com.

“There is no out clause.”

Edwards also refused to discuss the current situation with LDM but confirmed the team is open to selling its equipment to other operations.

“The history of this team is we have always sold cars and leased engines and we have done that  for years,” he added.