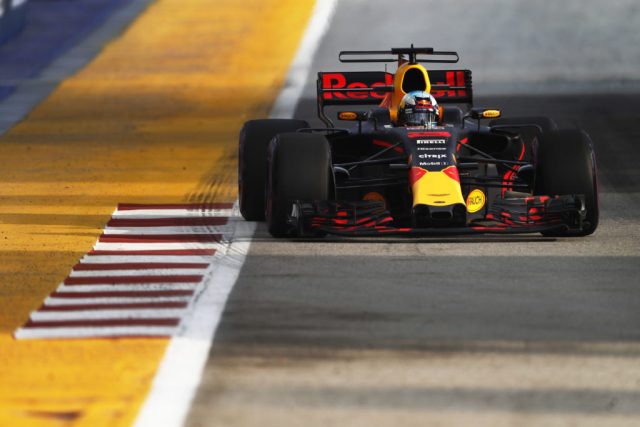 Daniel Ricciardo dominated the opening day’s running for Sunday’s Singapore Grand Prix as he headed a Red Bull 1-2 in the second practice session.

The Australian was more than half a second faster than team-mate Max Verstappen at the end of the 90-minute session, with Lewis Hamilton third best more than seven tenths back in the leading Mercedes.

Ricciardo’s 1m40.852s lowered his own benchmark from the opening session by more than 1.5-seconds, a time set over Ferrari’s Sebastian Vettel, who plummeted down the order in the second session.

Vettel ended the day’s running in 11th while Ferrari team-mate Kimi Raikkonen was only just inside the top ten.

Meanwhile, following news of their split with Honda, both McLaren drivers were comfortably in the ten, with Stoffel Vandoorne sixth ahead of Fernando Alonso in seventh.

They trailed Nico Hulkenberg’s Renault, which saw him improve from ninth to fifth across the two sessions, while Jolyon Palmer in the sister car could do no better than 14th.

A late mistake from Sainz saw the Toro Rosso driver in the escape road at the harbour front grandstand complex, the Spaniard reversing back onto the track and forcing a number of cars to take evasive action.

There was a spin from Romain Grosjean and championship leader Hamilton during the session, while a number of drivers brushed the wall in various parts of the circuit.

Final practice gets underway tomorrow at 2000(AEST) for a last 60-minute session prior to qualifying.