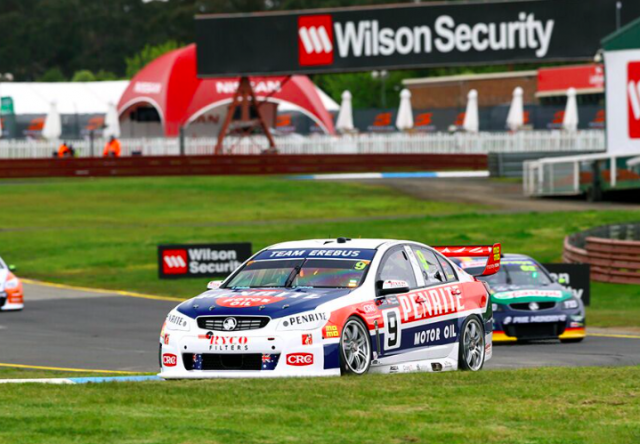 David Reynolds has secured pole position for #9 Erebus Motorsport entry ahead of this afternoon’s first qualifying race at the Wilson Security Sandown 500.

Reynolds impressed throughout the 20 minute session which was held in changeable conditions at the Melbourne circuit.

The Erebus driver jumped to the top of the times with a 1:08.79s prior to the halfway mark.

Prodrive’s Mark Winterbottom then found the top spot before being eclipsed by Scott McLaughlin in the #17 Shell V-Power Racing Falcon.

However, Reynolds responded to lower the benchmark to a 1:08.57s, which proved enough to claim pole by a margin of 0.0026s.

“We were really concerned after yesterday, we were really slow in the wet, but yeah man that was awesome,” said Reynolds.

“We didn’t touch the car since we rolled out, we just stuck with our base set-up, and it obviously paid off. I always try to get up to speed as quick as I can. I am really proud of everyone.”

A late rain shower provided drivers a challenge while the damp surface slowed the pace for the final minutes.

Chaz Mostert claimed third in the #55 Supercheap Auto Falcon while Winterbottom slid to fourth in the sister #5 Prodrive entry.

Craig Lowndes qualified 11th while Triple Eight team-mate Shane van Gisbergen struggled for pace, which left the car in 16th spot for this afternoon’s qualifying race for the co-drivers.

The Kiwi suffered a spin at Turn 4 late on as he went in search of a lap time.

“He (van Gisbergen) had a bit of an instability on entry so he couldn’t maximise his way into the corner and obviously if you’re losing on the way in you’re never going to maximise on the way out either,” said Triple Eight team manager Mark Dutton.

“We didn’t do a good job with the cars, everyone had the same amount of running on dry track, which was only really this morning and a little bit of P1 (Practice 1), so we haven’t executed well.

“We have lots of faith in him (co-driver Matt Campbell), he doesn’t have to go and race 110 percent or anything silly like that.

The opening Armor All Race for the Grid encounter, to be run by co-drivers, is scheduled for 1345 AEST.