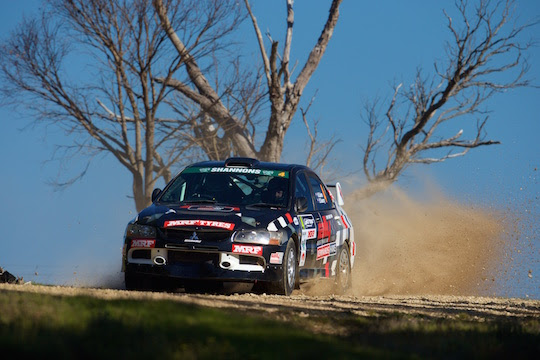 Nathan Quinn’s 2017 CAMS Australian Rally Championship campaign is back on track after a win in heat one of Lightforce Rally SA.

Quinn claimed six stage wins on the way to one victory to head Molly Taylor by 28 seconds heading into day two.

Taylor was fastest on two of the last four stages, but Quinn was still able to extend his lead by a further eight seconds during the night stages.

Craig Brooks put in a great drive to finish the day in third outright and lead the ARC2 class; today’s result could see him secure a place in the winner-takes-all ARC2 final at Kennards Hire Rally Australia.

John O’Dowd had a strong day, rounding out the top five behind Andrew Penny in fourth.

Harry Bates was sidelined before the first stage after his all-new Toyota Yaris AP4 suffered an engine misfire. The pair started the event but immediately returned to the service park. Despite working frantically all afternoon to fix the issue the team were unable to re-join heat one; they will now aim for a start in heat two tomorrow.

In the ARC 2WD class Adam Kaplan continued to dominate, taking heat one honours after the close battle with Lewis Bates ended prematurely due to alternator failure on the Toyota Corolla during stage five.

Several competitors suffered mechanical issues today; CAMS ARC2 leader Tony Sullens made an early exit from the event, blowing the engine in his Subaru Impreza WRX STi on stage one. Stephen Mee broke a drive shaft not once but twice.

Rally SA continues tomorrow at 8:30am with six stages and more than 90 kilometres of competition. Follow the event on ARC Twitter, get stage-by-stage rally results or view live timing.