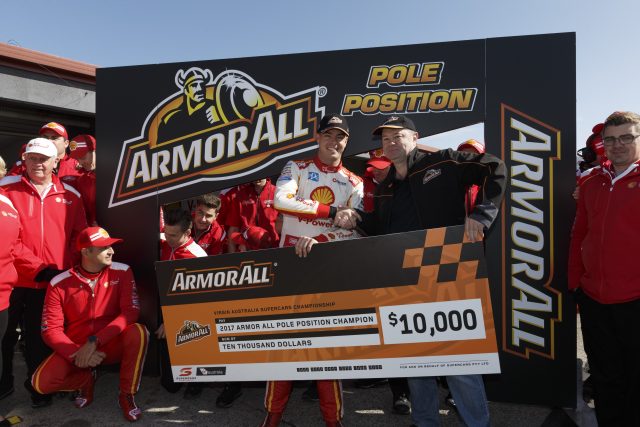 Scott McLaughlin is presented with the 2017 Armor All Pole Position Champion award at Sandown pic: Armor All Facebook

Scott McLaughlin has been officially presented with the 2017 Armor All Pole Champion award at the Wilson Security Sandown 500.

The Shell V-Power Racing driver took an unassailable lead in the pole position count at the last event at Sydney Motorsport Park when he qualified fastest for both races.

McLaughlin has qualified on pole for the last seven races in a row, and 13 times in total this season after just 18 races so far.

“This is literally the biggest cheque I have ever seen,” said McLaughlin.

“It is going to look cool and look good on a few boarding passes for Vegas, apparently.

“It is awesome, for everyone at Shell V-Power Racing, all our partners and supporters.

“It has been an awesome year so far; we have a long way to go and a lot more things we want to tick off but to have this wrapped up so early is pretty special.

“The car I have is amazing and I am a very lucky boy to get to drive it and be able to do what I can do with it.”

Armor All has awarded more than $1 million in prize money to pole sitters since the inception of the award, with 27 drivers having earned pole position in that time.

Today’s Armor All Qualifying at Sandown is a unique process whereby the starting grid is determined in three parts.

That 20-lap encounter for primary drivers will finalise the starting grid for the Sandown 500, and thus also the Armor All Pole Award.