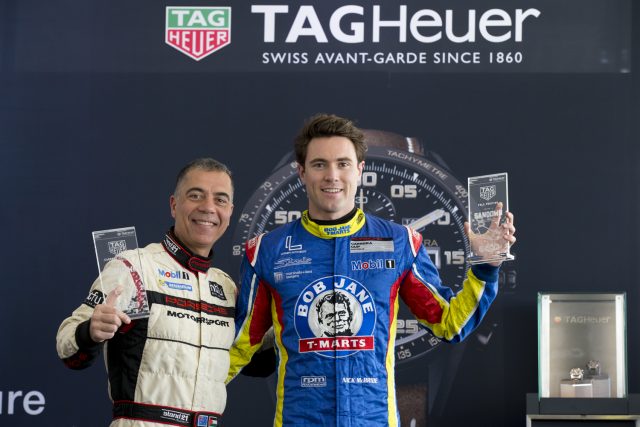 Nick McBride (right) and Sam Shahin with their pole awards

Nick McBride has secured pole for the Carrera Cup at Sandown with a late charge in drying conditions.

The session was run throughout on slick Michelin tyres, but with numerous wet patches around the circuit.

The session got off to a wild start with cars spinning on the out lap and Tag Heuer Carrera Challenge racer Graham Williams tagging the pit exit wall.

Another red flag towards the end of the session for the beached Porsche of Dylan O’Keeffe set up an exciting final 60 seconds as positions swapped around.

McBride started his final lap with around six seconds to run and it made all the difference as he took his first pole since the Grand Prix support event at Albert Park in March.

McBride will share the front row for the opening race with Jaxon Evans, with the second row filled by Andre Heimgartner and GT3 Cup Challenge series winner Jordan Love.

The first of three races gets underway at 12:55pm local time.