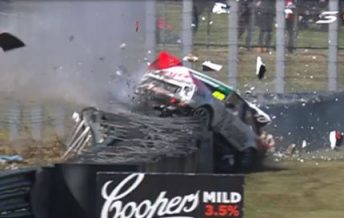 A major crash for Jason Gomersall has seen Race 2 of Touring Car Masters at Sandown declared before a result could be achieved.

Gomersall locked the left-front in the Bigmate Torana A9X at the end of the back straight and couldn’t make the corner.

He instead made heavy contact with the tyre wall on the car’s front-right corner, lifting up in the air before coming to rest.

Gomersall put himself into the medical vehicle which attended, but repairs to the tyre wall meant the race was declared on Lap 2.

With the race scheduled for 10 laps, no result will be issued.

John Bowe had been in the lead after taking the inside run through the first corner from pole position.

The final race of Round 5 starts tomorrow at 1020 local time/AEST.