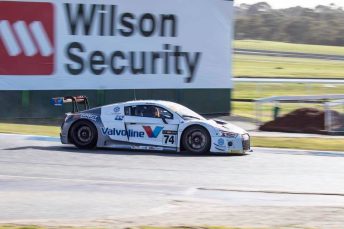 Geoff Emery has won the 2017 Australian GT Championship after finishing fifth in the final race of the season at Sandown International Motor Raceway.

Ross moved up from sixth on the grid to challenge Richards inside the quarter-hour mark, but he soon had a charging Ash Walsh (#44 Supabarn Audi R8) on his own tail.

Ross was kept wide by Richards at Turn 2 on Lap 14, allowing Walsh to pounce, and the Brad Jones Racing Supercars co-driver made up another position to lead the race before the lap was out.

Ross did find a way past Richards at the start of Lap 15, just before halfway through the 40-minute encounter, as Walsh pulled away.

The top four, rounded off by Talbot, pitted at the end of Lap 17 to complete the compulsory pit stops, putting Ross in the lead for the first time with about a second’s margin to second-placed Talbot, while Emery shook out in ninth.

As such, Talbot was back in the live championship lead by four points.

However, he was actually losing ground to Ross, as Emery halved the gap by passing team-mate Steve McLaughlan.

There was a nervous moment for Emery when Max Twigg (#8 Scott Taylor Motorsport Mercedes-AMG GT) outbraked James Bergmuller at Turn 4 with 12 minutes remaining, slowing the latter and causing Emery to nudge the #100 BMW.

However, the incident did help Emery to pass Bergmuller and he was soon cleared of wrongdoing by race control, putting him back into the championship lead by a single point.

With Ross continuing to build his lead over Talbot, Emery’s position was a favourable one, and his hold on the title became more certain when Twigg took Ash Samadi (#3 Ash Samadi Racing Audi R8) out just in front of the #74 Audi with six minutes to run.

Emery thus rose to fifth position, meaning Talbot would have to pass Ross to put himself back in front by just the one point.

Talbot did make up some of the gap in the final laps but never looked like getting close enough.

Instead, Emery, this weekend driving solo due to a date clash for regular driving partner Kelvin van der Linde, brought his Audi home in fifth to be crowned 2017 Australian GT champion.

Duvashen Padayachee brought the Audi he shared with Ash Walsh to the finish in third, on position ahead of Mark Griffith (#19 Griffith Corporation Mercedes-AMG GT).

After Emery, the top 10 was rounded out by McLaughlan, Quinn, Richards/Bergmuller, Twigg, and Samadi.