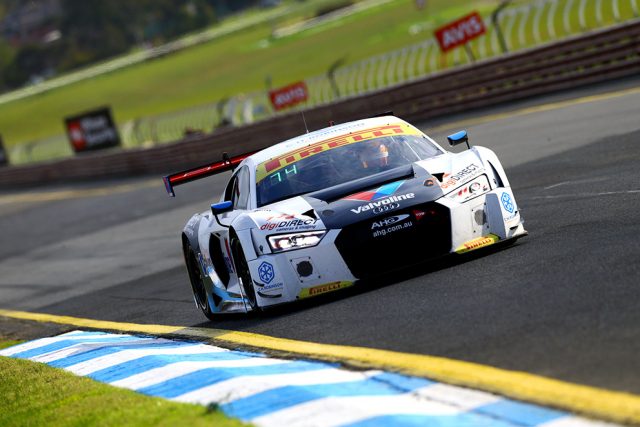 Geoff Emery has won the opening race in the final round of the Australian GT Championship at Sandown, tightening the margin to Liam Talbot at the top of the table.

Emery took the lead after the compulsory pit stops and held it for the rest of the race, while Fraser Ross’s progress was undone by lapped traffic as he finished second, on position ahead of Talbot.

Pole-sitter Ash Walsh took control of the early stages of the race, leading all the way to his compulsory pit stop as he amassed a lead of nearly seven seconds in the #44 Supabarn Audi R8.

Ross made an impressive move to take over second position when he passed Emery on the outside into the Esses on Lap 10.

While he gapped Emery until they both pitted on Lap 16, the #58 McElrea Racing McLaren 650S did not have enough margin over the #74 Jamec Pem Audi R8 to stay in the lead when pit stop times came into play.

The front of the field after the CPS cycle was thus Emery with a lead of nearly six seconds over Ross, with Talbot third and Duvashen Padayachee a distant fourth in the Audi he had taken over from Walsh.

Despite the track drying in the morning Melbourne sun after rain an hour prior to the race start, no cars changed from wets to slicks during their pit stops.

Ross set about reeling out a succession of fastest laps and had reduced Emery’s lead to 2.3s with around seven of 40 minutes remaining, with a tight finish in sight.

However, he lost approximately three seconds in traffic on Lap 24, putting paid to his chances.

Emery, who is second in the championship, instead took a victory of 5.7s, with Talbot 3.2s further behind in third position in the #911 Walkinshaw Racing Porsche 911 GT3-R.

Padayachee set the fastest lap on the 29th and final lap as he brought the #44 Audi to the finish line in fourth, with Ash Samadi fifth in the #3 Ah Audi R8.

Steve McLaughlan suffered an early spin on his way to sixth in the #75 Jamec Pem Audi R8.

Round 5, and thus Australian GT Championship, finishes today with two more 40-minute races, the next at 1205 local time/AEST.