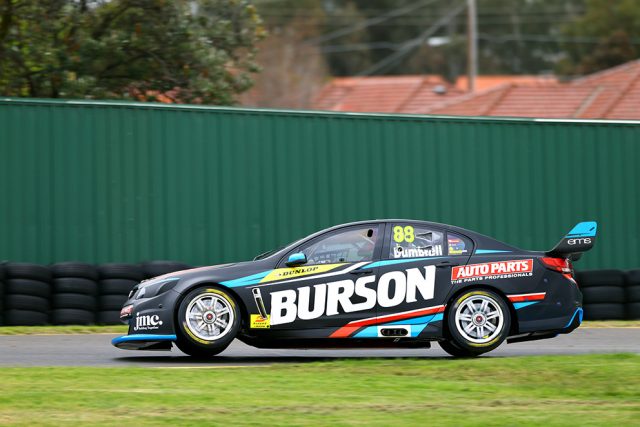 Paul Dumbrell has moved back into the ascendancy in the Dunlop Super2 Series by winning Race 1 at Sandown, while Todd Hazelwood got back behind the wheel to finish third.

The result puts Dumbrell (#88 Eggleston Motorsport VF Commodore) back ahead of Hazelwood (#35 Matt Stone Racing VF Commodore) in a see-sawing battle for the title, while Jack Le Brocq split them on the road at the end of the shortened 18-lap race.

Hazelwood was back in the driver’s seat less than 90 minutes after his horror Supercars Championship crash.

Jack Perkins made a bold outside move at Turn 1 to pass Will Brown (#38 Eggleston Motorsport VF Commodore) for fourth at the start of Lap 2, but brought out the Safety Car by the end of the lap due to a crash at Dandenong Road.

The Walkinshaw Racing enduro co-driver got sideways at the top of the back straight and was in turn nudged from behind by Anton de Pasquale (#67 Paul Morris Motorsports FGX Falcon) as he attempted to gather up his car through the Esses.

The #4 Dragon Motor Racing Commodore made front-on contact with the fence as a result and came to rest in the gravel trap, with the incident to be investigated post-race.

Dumbrell paced the field at the restart on Lap 7 and drove on to record a comfortable win of nearly three seconds, over Le Brocq, Hazelwood, and de Pasquale, as the front-runners strung out.

Brown got past Richard Muscat (#44 Garry Rogers Motorsport VF Commodore) to take fifth, crossing the line just ahead of the debuting Supercars co-driver.

Davies and Kostecki pounced on Andrew Jones (#8 VF Commodore) up the back straight on Lap 7, the latter with a daring late move at the top of the hill.

Andrew Jones had presented the opportunity when his run onto the straight was compromised by a dive past Brad Jones Racing team-mate and cousin Macauley Jones (#14 VF Commodore).

Davies and Kotsecki later banged together on the main straight when the latter got a run due to a wounded Bryce Fullwood (#16 MW Motorsport Nissan Altima) holding up his team-mate as he crawled towards pit lane.

Davies was presented with the bad sportsmanship flag by race control for the hits.

Andrew and Macauley Jones rounded out the top 10.

Garry Jacobson’s (#1 Prodrive Racing Australia FGX Falcon) frustrating season continued when finished down in 18th after being issued a drive-through penalty for passing before the restart.

Super2 will be back for qualifying for the second race of the weekend tomorrow morning at 0915 local time/AEST.