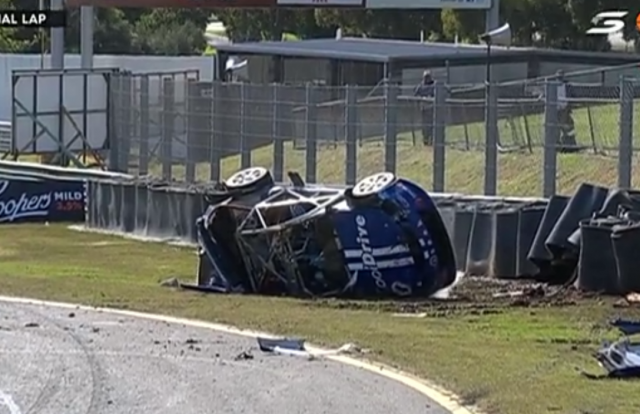 Todd Hazelwood has walked away unscathed from a horror shunt at Sandown he has described as ‘the worst feeling’ of his motor racing career.

The 22-year-old has been released from the medical centre after being involved in an horrific crash that red flagged the co-driver Race to the Grid encounter on the penultimate lap.

A lock up from Tekno Autosports’ Jonathon Webb saw the Holden tag the rear of Hazelwood’s #4 Brad Jones Racing Commodore at the high speed Turn 6.

Hazelwood was sent rearwards into the barriers before encountering a series of barrel rolls that ripped body panels and the roof from his car.

He managed to climb from the wreckage before being checked over by medics.

While happy to emerge unscathed, the Dunlop Super2 series leader says he was devastated by the incident that will rule the car, which he is sharing with Tim Blanchard, out of the weekend. 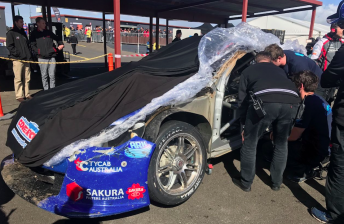 The remains of Todd Hazelwood’s car

“We just wanted to get through that race.

“I knew Jono (Webb) was there and I just thought if I could hang where I was I’ll be okay and then next thing I just copped a massive whack in the left-rear.

“When you’re doing 260 km/h across the top and you get a whack like that, you’re just a passenger, and I just put the hands on the helmet and tried to relax when I hit the tyre wall.

“When I was going up in the air thinking, ‘Oh my God, this is going to be huge,’

“Tim’s been doing a really good job and the team’s been getting some really good momentum coming into this weekend and for this to happen before the 500 km race tomorrow.

“It’s not what I do, I haven’t ever wrecked a Supercar in my life, I’ve been doing it for a while now, and just shattered, to be honest.

“I can tell you now it is probably the worst feeling I’ve ever had.

“(I’m) A bit shaken up, I was a bit wounded when I landed, but all good now, ready to fit, I’ve got to go and run to the grid now for the Super2 race.”

“My legs were just a ragdoll and fortunately it (leg protection) actually got put in for this weekend, so thank you to Supercars for implementing that because I don’t know if I would have been standing up as alright as I am now,” added Hazelwood.

The car is now set to return to Brad Jones Racing’s Albury workshop to assess if there is anything salvageable from the chassis.

Meanwhile, Webb has explained his view of the incident that will see the #19 miss this afternoon’s final Race to the Grid encounter.

“There was a couple of cars in front of me. To be honest, I wasn’t trying to overtake them, they were just playing silly buggers and I ended up there,” said Webb.

“You realise how slow the Nissan is in a straightline and I thought I’d give it a bit of a push along.

“By the time I got to the hill I just got caught up in all of the aero, grabbed a front brake and unfortunately grabbed Todd on the way through.

“Obviously we won’t be running this afternoon for Will, but we’ll see how we go tonight whether we put it away or whether we come play again tomorrow.”