Caruso on top as SVG, Coulthard collide in practice

Caruso on top as SVG, Coulthard collide in practice 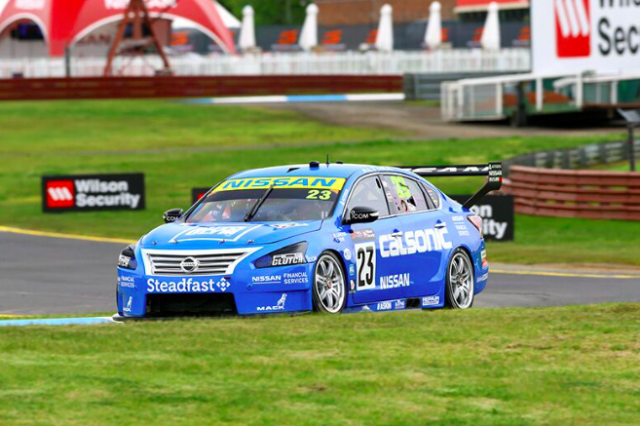 Michael Caruso posted the fastest time in final practice as the primary drivers logged their first dry running of the Sandown 500 weekend.

Drivers were presented with the driest track conditions of the weekend so far, although the surface featured plenty of damp patches following an overnight rain shower.

Caruso surged to the top of the times as the 15 minute session reached its final stages after posting a 1:10.74s effort.

The Nissan Motorsport was sitting atop of the times from Scott McLaughlin when the session was red flagged with two minutes remaining.

James Moffat’s #34 Garry Rogers Motorsport Holden Commodore nudged the barriers at Turn 4 before becoming bogged in the wet grass on the exit of the corner.

Practice restarted providing a flurry of times in the final minutes.

“The conditions of the circuit were pretty difficult because there’s still a few wet patches on the track,” said Caruso.

“It is hard to get a real judge on how the car is going to handle for qualifying, but nonetheless it’s good that our car’s good in the majority of the conditions.”

The final minute provided a talking point when Triple Eight’s Shane van Gisbergen nudged the rear of Fabian Coulthard’s car, resulting in a spin for the Shell Ford at the final corner.

Van Gisbergen immediately apologised for the error over the radio before going to see his countryman at the end of the session.

Stewards elected to investigate the incident.

“Phil (Keed engineer) is fired up but you know, at the end of the day there is no rewind button for Shane so we will just cop it and move on, we are not too fazed,” said Coulthard.

“It is what it is, I am not too fazed, he is going to come down, he is a decent enough person normally to do that so I would expect it from him.”

Meanwhile, Freightliner Racing’s Tim Slade was among a group of drivers to improve as he jumped to fourth ahead of Brad Jones Racing team-mate Nick Percat.

Todd Kelly ensured three of the four Nissans finished in the top 10 in sixth.

Mark Winterbottom was 11th after struggles on Friday that resulted in Prodrive undergoing an investigation on the car.

The team were unable to find an issue with the Falcon.

Jamie Whincup could only manage 15th spot, while Coulthard was mired in 25th position.

The field will return for a 20 minute qualifying session at 1050 AEST.