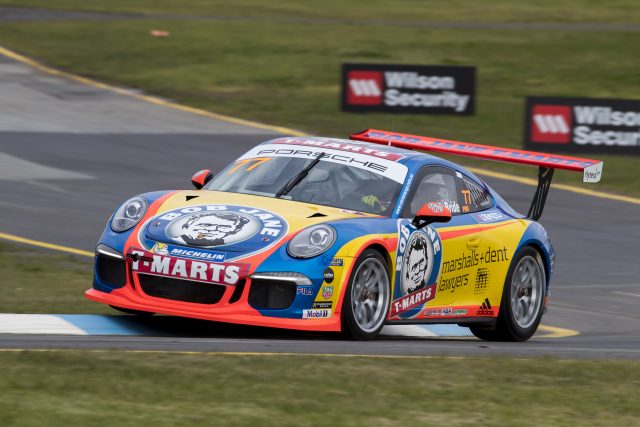 Two from two for McBride at Sandown

After the repairs to the fence after the Todd Hazelwood and Jonathon Webb crash in the Supercars, the Carrera Cup race got underway late.

McBride got the jump off the start to head Sonic Motor Racing team-mate Andre Heimgartner, but there was confusion towards the end of the lap with the Safety Car parked on the circuit as the field swept by.

The race continued, before the Safety Car was called back onto the track when Jordan Love went off at Dandenong Rd and found the gravel trap.

Upon the re-start, McBride again took control, while behind Alex Davison’s pressure on Heimgartner paid off when a slight mistake allowed him through a lap from the finish.

No such issues for McBride who took the chequered flag after nine of the scheduled 13-laps.

Tim Miles continued his good run on the Tag Heuer Carrera Challenge to win the semi-professional class from Stephen Grove and Sam Shahin.

The final Carrera Cup race of the weekend will be the first of the endurance races of the season with 25-laps scheduled for championship enduro points at 11:55am local time.

VIDEO: McBride and Miles speak after the second race