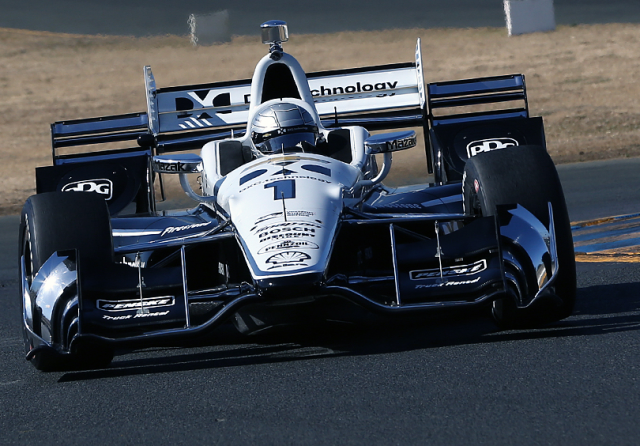 Simon Pagenaud has topped the final open test of the Verizon IndyCar Series season before this weekend’s final round at Sonoma, while championship leader Josef Newgarden was ninth fastest.

“We had a great day today,” said Pagenaud.

“We wanted to explore a direction. We have a new Firestone tyre this year, so we have to forget a little bit about what we did last year and be curious and try things.

Pagenaud was the first of a trio of Penske entries at the very top of the timesheets, with Helio Castroneves second-fastest and Will Power third.

Castroneves and Pagenaud are still in the hunt to win the series while Will Power, who was fastest in the day’s morning session, is a slim chance in fifth place in the points.

Sebastien Bourdais was fourth-fastest and first of the Hondas in his Dale Coyne Racing entry.

Takuma Sato was the only major incident of the day when he ran off at Turn 6 and incurred damage to the rear of his Andretti Autosport Honda during the morning.

The Japanese driver returned to the track in the afternoon, finishing 14th.