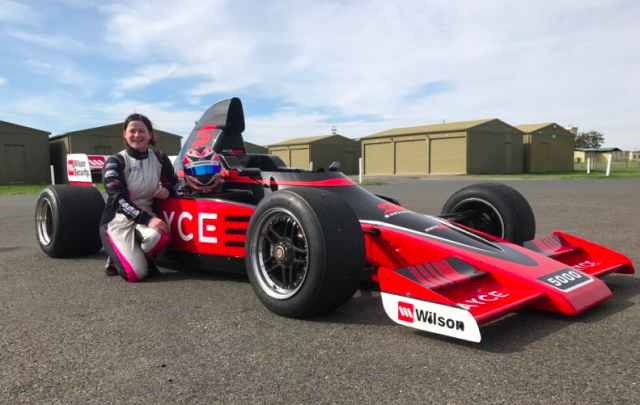 The Super5000 will make its first public appearance at the Melbourne venue this weekend ahead of a new Formula 5000 series planned for 2018, as revealed by Speedcafe.com.

Husband and Supercars driver Garth Tander, who tested the car at Phillip Island, was set to conduct the demo sessions but a tight event schedule has seen Leanne take over the running.

Leanne Tander, who is the reigning Australian Formula Ford Series winner, experienced the car for the first time during a test at Mallala on Tuesday.

The former Australian Formula 3 driver will conduct demo laps across two sessions on Saturday and Sunday.

“With 650bhp Garth certainly took notice of it and so did I,” said Tander.

“It’s been a long time since I’ve driven anything with that much horsepower.

“I found I was able to get to pretty reasonable times once I adjusted to the car and everything.

“Its driveability is good, Mallala is quite a tight little track, so to manoeuvre the car around there wasn’t a problem.

“By keeping the aero down a bit, or to a minimum, I think it will promote good racing, which is what you want. It will be a fun category.”

The Super5000 concept is backed by Wilson Security and Payce with a view to the series commencing in 2018.

The proposed category has joined forces with Formula Thunder 5000 under a united front to establish the series.

The Formula Thunder 5000 prototype, which is on display this weekend, is expected to run at a Supercars event later in the year.