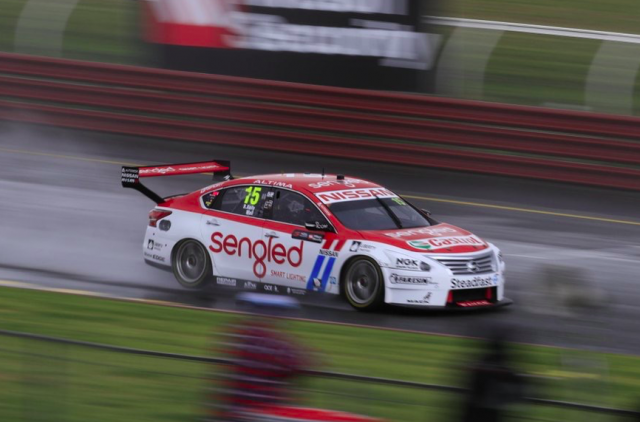 Heavy rain greeted the primary drivers prior to the session providing treacherous track conditions for the 30 minute hit out.

As a result, several drivers were caught out but it was Coulthard who suffered the worst of the off track excursions.

The Shell V Power Racing driver fired into the barriers at the Esses after losing control on the entry to Turn 6, with four minutes remaining. 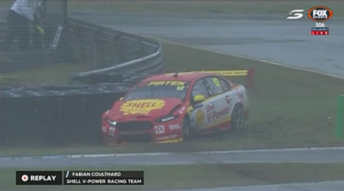 Fabian Coulthard suffered an off at the Esses pic:Fox Sports

Coulthard emerged from the cockpit under his own steam, although his car sustained damage to the front.

“It happened very fast, it is a quick corner anyway and the combination of the weather and how slippery it is, we have come a cropper,” said Coulthard.

“Unfortunately I have given a fair bit of work to my guys here at Shell V-Power Racing, you know it is not intentional and it just happened so quick.

“That is the nature of this business we do and unfortunately sometimes you come a cropper and in this instance we did.”

Officials elected against restarting the session leaving Kelly at the top of the times having posted a 1:20.50s effort.

Kelly’s #15 Nissan Altima ran strongly throughout before he lit up the timing screens as the outing headed into its final third.

“It’s always fun to be fast. Obviously it’s quite wet so we’re just circulating and feeling what our car’s like in the wet,” said Kelly.

“Ours is pretty strong. I think the last time I won a race was here in the wet so it was a good day.”

Chaz Mostert was third fastest having enjoyed two spells atop of the timesheets during the session in his retro liveried Supercheap Auto backed Ford Falcon.

Mobil 1 HSV Racing’s James Courtney was fourth ahead of the Red Bull Holden of Shane van Gisbergen, who was among the drivers to endure an off track excursion.

The co-drivers will return for another 30 minute practice session at 1610 AEST.