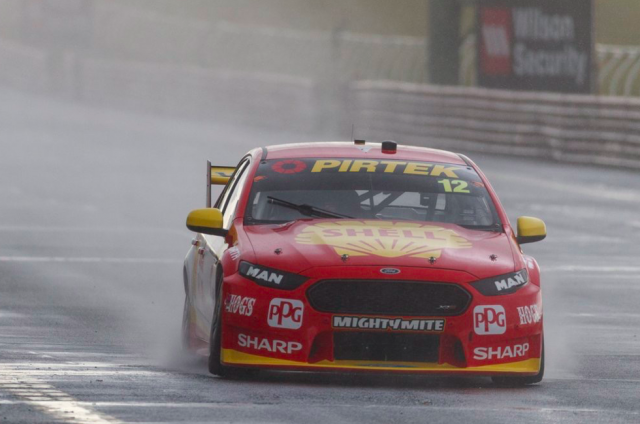 The #12 Shell Ford successfully returned to the track after the team completed repairs following Fabian Coulthard’s crash in Practice 2.

D’Alberto mastered the tricky wet conditions that were presented to the co-drivers as rain persisted at the Melbourne circuit.

The conditions provided plenty of wild moments for the field with many running across the grass at Turn 2, the Esses and the final corner.

However, it was D’Alberto who emerged with the benchmark time after posting a 1:20.97s to top the session.

“The car felt pretty good there. We just focused on staying out there and getting a bit of tyre temp, very slippery though, extremely slippery,” said D’Alberto.

“It is good to get accustomed to the track in these conditions as who knows what tomorrow is going to bring.”

“Credit to everyone at Shell V-Power Racing, they turned this car around from my undoing in the practice before so it is a good repayment for the boys,” added Coulthard.

Mobil 1 HSV Racing continued its strong showing in the wet as Warren Luff clocked the second fastest time in the #02 he will share with Scott Pye.

Richard Muscat settled for third in the #34 Garry Rogers Motorsport Holden having topped the session early in the running.

After replacing the transaxle in the break between sessions, the #22 Mobil 1 HSV Racing Commodore piloted by Jack Perkins was sixth.

Triple Eight were among a handful of entries that struggled for pace during the session.

Paul Dumbrell was the fastest from the Brisbane operation in 14th, Steven Richards (#888 TeamVortex) finished in 20th, while Matt Campbell (#97 Red Bull Holden) was 23rd.

The team elected not to run a full wet set-up on its cars.

“We know we’ve got excellent co-drivers, so when they’re down the bottom clearly the cars aren’t fast,” said Jamie Whincup.

“In saying that, we haven’t got a full wet set-up because the weekend is looking like it will be dry. But we genuinely don’t have any pace, which is a little bit concerning for qualifying tomorrow if the track is wet.”

Mark Winterbottom’s #5 Falcon propped up the times with Dean Canto at the wheel after facing struggles throughout.

The Supercars field return to the track tomorrow for a final 15 minute practice session at 0920 AEST, prior to a 20 minute qualifying session.