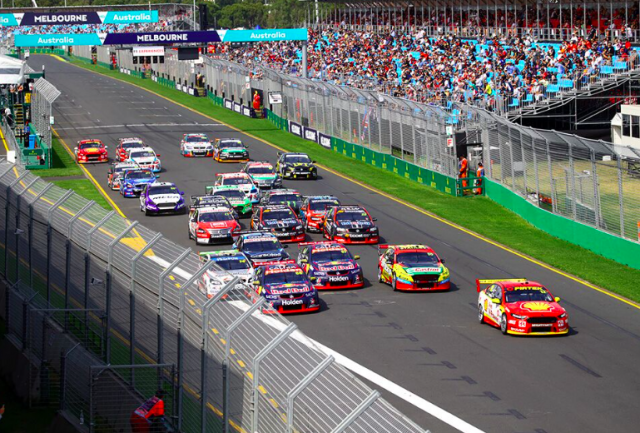 Supercars supremo James Warburton’s visit to the Singapore Grand Prix is much more than meetings with the promoters of potential Asian V8 events.

The main reason Warburton is missing this weekend’s Wilson Security Sandown 500 is for top-level talks about aligning Supercars more closely with Formula 1 in the region.

Speedcafe.com understands that moves are under way to make Supercars an official support category of F1, appearing at selected events in addition to the Australian Grand Prix.

As well as the Singapore GP night race event, Warburton is looking to get Supercars on the undercard of the Chinese and Japanese GPs, and any future new Asian races.

“Supercars has a desire to be an official support category of F1,” an F1 insider confirmed.

The informant added that the Supercars support races at Albert Park impressed F1’s new senior executives in their first visit to Melbourne for this year’s event, resulting in approval for them to be upgraded to championship status from 2018.

“The AGP will only hold them in good stead for other F1 events,” the insider said.

Warburton left for Singapore yesterday (Wednesday) and has scheduled a range of meetings in the island city-state from today (Thursday) through to Monday.

Along with continuing discussions with the Singapore GP organisers about Supercars providing the main daytime track action at the Marina Bay street circuit from 2019, he will meet with F1 chiefs about forming closer ties in Asia.

He will also hold talks with visiting representatives of southeast Asian circuits that have expressed interest in hosting Supercars events.

While Warbuton’s trip is being characterised as an opportunity to progress negotiations with the promoters of proposed V8 events in Malaysia, Thailand, Indonesia and China in face-to-face meetings at a central venue, that alone doesn’t justify his absence from such an important race as the Sandown 500.

The primary purpose is to secure a regional alliance with F1, beginning with Supercars becoming the major supporting category at the Singapore Grand Prix.

“We would like to be there (at the Singapore Grand Prix). There is certainly no firm decision either way, it is just matter of furthering that relationship,” Warburton told Speedcafe.com.

“We are talking to promoters. That pathway of effectively becoming an official support category is there.

“Really it is just an opportunity to further some relationships and start new relationships, and explore all options on the table.

“This is more so around 2019. We are sort of moving into the next phase if you like.

“The promoter model has been hard work it is really actually about joining existing spends.”

He confirmed that he had scheduled “a whole range of meetings” in Singapore with F1 management, the local organisers and other track promoters from the region, including the boss of the Sepang International Circuit outside Kuala Lumpur, as previously reported.

Sepang is hosting its last F1 Malaysian GP next month and Supercars is among the alternatives being considered for new international races.

Warburton’s presence at the Singapore GP will coincide with a likely decision on the race’s future.

This weekend’s 10th running of F1’s first and most glamourous night race is the last of the existing contract and the organisers are understood to holding out for a more attractive financial deal to renew.

The feeling among insiders is that F1 needs to retain the event as its showcase Asian street race and that Singapore wants to continue reaping the global promotional benefits, but at a lower cost.

A new long-term agreement from 2018 could be announced before Sunday night’s race.

Assuming the Singapore GP continues, Supercars will aim for the 2019 event as it is too late to be included in next year’s calendar, which Speedcafe.com understands is all but finalised ahead of its announcement before next month’s Supercheap Auto Bathurst 1000.

Also, if the Singapore GP retains its third weekend in September slot, Supercars will have to reschedule the Sandown 500.

They have clashed since last year due to the fall of the calendar, whereas previously the Singapore GP had been run a week after Sandown.

But with Sandown’s future beyond 2019 – the last year of the existing agreement – in doubt, Warburton has already declared that Supercars is prepared to move the 500 to make way for the Singapore GP.

Supercars’ hopes of becoming an official regional F1 support category – joining Porsche Supercup, F2 and GP3, which run at selected GPs in Europe, the Middle East and North America – are consistent with the closer relationship formed at the Australian GP.

Supercars is now officially an F1-approved category following Liberty Media-owned F1’s sanctioning of the elevation of the V8 races at Albert Park to championship status from next year.

Since the new arrangement’s announcement at the end of May, along with an extension to coincide with the AGP’s contract through 2023, Supercars has been forming closer ties with F1, which is supporting efforts for the V8s to appear at the Singapore GP.