LDM considering move to Ford in 2018

LDM considering move to Ford in 2018 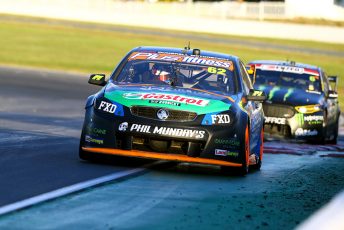 Lucas Dumbrell Motorsport is assessing its options for next season

Lucas Dumbrell Motorsport is weighing up the possibility of switching from Holden to Ford next season.

The Melbourne squad has confirmed to Speedcafe.com that it is assessing all of its options for 2018, including the purchase of Prodrive Falcon FGXs.

Lucas Dumbrell Motorsport has proved loyal to Holden having run Commodores since its inception in the category in 2010.

The squad has persisted with the same Triple Eight built equipment since 2013.

Team owner Lucas Dumbrell is adamant that a deal is yet to be struck to change to Ford, but confirmed discussions have been held.

“(We’re) definitely looking to change car suppliers at the moment, and Prodrive are 100 percent one of the options,” Dumbrell told Speedcafe.com.

“When they say it’s done or whatever, it’s not true.

“After the changes at Holden in the last 12 months, honestly it means nothing to me now unfortunately.

“Prior, I had the Holden’s backing and their support of the whole program was great and everyone at Holden made a huge effort to help.

“Peter Harker, Simon McNamara, those guys did an amazing job and worked hard to help every single team, not just the factory team at the time.

“But unfortunately now the people they’ve got in place there don’t seem to care.”

The talks arrive while Triple Eight is currently exclusively developing the new Holden ZB Commodore, which will be introduced next year.

Meanwhile, a customer arrangement between LDM and Prodrive could present an opportunity for Richie Stanaway to secure a full-time drive with the team.

The Kiwi has made his intentions to step up to Supercars clear and scored a victory in one-off Dunlop Super2 outing with Prodrive at Sydney Motorsport Park last month.

Dumbrell has also confirmed that, while his time is contemplating a manufacturer change, there could be an alteration to the structure of the team.

Long term backer Phil Munday, whose Repair Management Australia business has featured on the cars in recent seasons, is involved in talks to become a partner/shareholder of the squad.

“I chat to Phil every day, he’s a big supporter of the team and it’s a natural thing that he’s really been a major sponsor for the last couple years,” Dumbrell added.

“It’s just been good. I value his support and his advice majorly, and it’s only going to be a benefit for me to enable so much more.

“We’ve discussed moving a couple of times over the last couple of years because he’s been partner for six years now. He really is part of the team.

“The only difference is now because he’s retired from his full-time employment now he’s able to dedicate more time to try and help me.

“Previously he’s only able to come by about once a week, if that, whilst trying to manage over 200 staff he had.

“He’s obviously been around the industry for a long time and a massive supporter of mine.

“It’s really no secret that if he wants to help me more, it makes sense that he get involved in a shareholding kind of way.