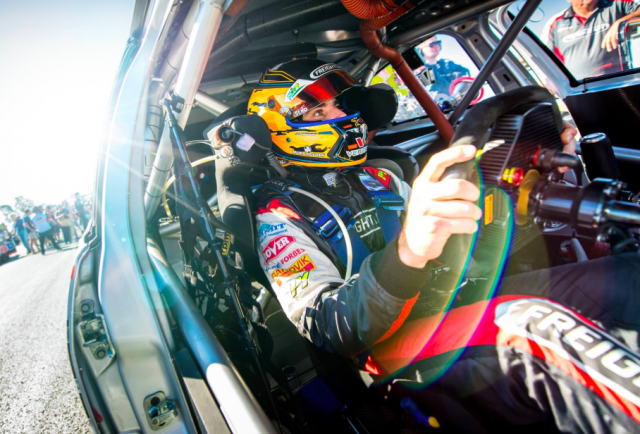 Tim Slade is hopeful of securing a new contract at Brad Jones Racing to extend his tenure into 2018.

The South Australian is off contract as his two-year deal with the Albury squad is set to expire at the end of the season.

Slade has formed a strong bond with the team having joined the operation in 2016 following a two-year spell at Walkinshaw Racing.

Since racing for BJR, the 32-year-old has scored a breakthrough Supercars race win following an impressive double triumph at Winton last year, on his way to eighth in the championship.

Slade has been unable to replicate the form this season but remains 11th in the standings after recording five top 10 finishes.

Although his Supercars future is yet to be secured, he is unconcerned and expects a new deal will be forthcoming.

“I’m out of contract and I have nothing on paper for next year, but I love where I’m at and what I am a part of,” Slade told Speedcafe.com.

“I think we both want to continue it and it is just a matter of doing all the formalities. I’m not worried or anything like that.

“There is nothing really to discuss I have a good honest relationship with Brad (Jones team owner) and I have 110 percent trust in him and Kim Jones (team co-owner).

“They are both straight shooters and I know exactly where I stand.

“I love it (Brad Jones Racing). It is the happiest I have ever been. I have made no secret about that and it is awesome to work for Brad and Kim.”

While discussions regarding a new deal are yet to begin, team owner Brad Jones has indicated that he intends to strike a new arrangement with Slade for next season.

“I think Tim has been fantastic and he has definitely found a home at BJR,” Jones told Speedcafe.com.

“I think he is a important part of the future going forward and our intention is to continue on in the same vein.

“He fits in well with everyone and he has got a good work ethic, and they are things we look for in a member of our team.

“It is something we will sort out in due course and we are just working through it.”

Switching the focus back to this weekend’s Wilson Security Sandown 500, Slade will one again be joined by Ash Walsh for the 500km enduro.

The pair head into the race having been unable to test after bad weather curtailed BJR’s scheduled test at Winton last week.

However, Slade says extensive driver change practice in the workshop has ensured the team will be sharp for this weekend’s Pirtek Enduro Cup opener.

“We have done everything that we could in the workshop with driver changes,” added Slade.

“It (the lack of testing) hasn’t affected me too much and the guys are top of the pit stops.

“I feel that we are better prepared on the driver change than we were this time last year.

“We have made pretty decent progress with the cars at the last two events.

“Sandown traditionally hasn’t been fantastic for BJR so hopefully we can have some decent speed there.”