Aus GT title to be decided at Sandown

Aus GT title to be decided at Sandown 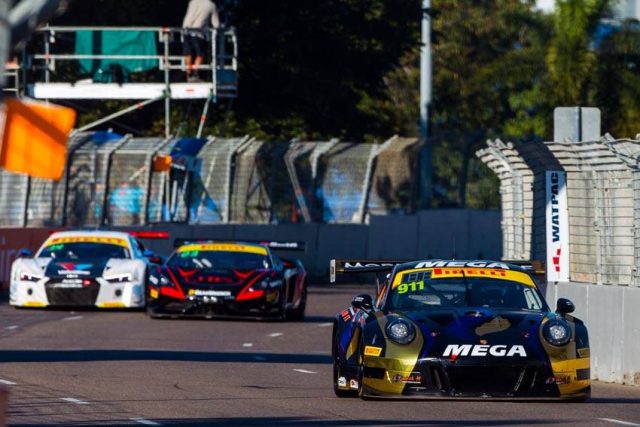 Australian GT’s championship contenders are readying themselves for a frantic final sprint round of the season at Sandown.

The top five drivers in the points are still in with a theoretical chance of claiming the title, with Liam Talbot the leader.

The fifth and final round will be contested over three 40-minute races, all of which will be held on the Saturday at the Wilson Security Sandown 500.

“It’d be a very special feeling to win the championship,” said Talbot, who drives the Mega-backed Walkinshaw Racing Porsche 911 GT3-R.

“I’ve seen what Klark Quinn (three-time champion, including 2016) has done over the years, and to be able to emulate that would be incredible.

“We know what we’ve got to do and we’ve proven through the year what we can do.

“I love pressure, the longer the racing goes the stronger I get, so I can’t wait.

“I think the Saturday race schedule with everything jammed in will be great for me; my fitness is the best it’s ever been, so I can’t wait to get back on track.”

Talbot leads the championship by 28 points over Jamec Pem Racing’s Geoff Emery, who will be driving solo for the first time this year at Sandown.

Emery’s regular partner Kelvin van der Linde will be absent due to a clash with ADAC GT Masters at the Sachsenring.

Emery says that his season has already been a remarkable one given that the Audi R8 LMS driver was out of action for much of last year after breaking a vertebra in a nasty crash at Barbagallo.

Adelaide’s GT season opener was his first round since the accident.

“I’d be rapt to be able to do that off the back of last year,” said Emery of the prospect of winning the championship.

“I’m happy with how the season’s gone, especially considering where I was this time last year; I was learning to walk again.

“To come back and potentially have a chance of winning the championship, I’m actually pretty happy with how it’s gone.”

Supabarn Audi driver Ash Walsh, who will be performing double duties in his capacity as a Brad Jones Racing Supercars co-driver, is third in the standings.

He will drive with Duvashen Padayachee, as he did during the last round in Townsville, due to the unavailability of team owner James Koundouris.

Roger Lago sits fourth in the championship but will not compete this weekend due to mechanical issues for his Lamborghini Gallardo.

Max Twigg, who won a race in Townsville, is an outside championship chance in his Scott Taylor Motorsport-prepared Mercedes-AMG GT3, given that he is 149 points off the pace with a maximum 221 on offer.

Taylor himself is out for the remainder of the GT season due to a sizeable shunt in Round 2 of the Australian Endurance Championship last month at Sydney Motorsport Park.

Action gets underway with a 20-minute practice session on Friday September 15 from 0830 AEST/local time.