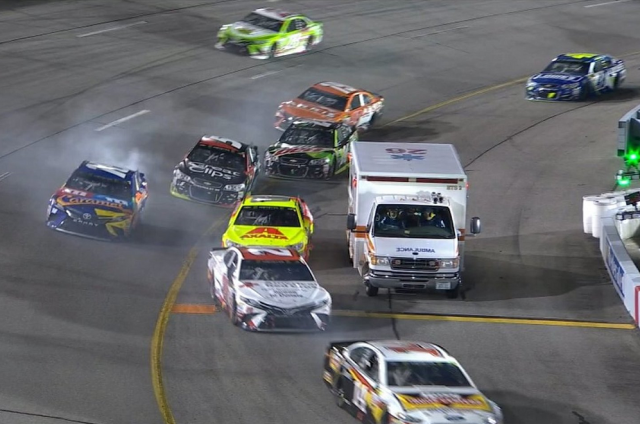 Cars attempt to pit with an ambulance in the way

NASCAR has explained how an ambulance was left sitting at pit entry as the field pitted under Caution during the weekend’s Richmond Cup Series race.

A number of drivers opted to pit when Danica Patrick spun on Lap 256 of 400 and prompted a Caution.

However, an ambulance was also entering the pits at the same time.

Matt Kenseth, who qualified on pole and had dominated the race early on, suffered terminal damage to his Joe Gibbs Racing Toyota’s radiator when he rammed Clint Bowyer as the cars concertinaed at pit entry.

Other drivers swerved onto the track before crossing back over the pit lane line, with NASCAR waving all commitment line violations during the incident.

“We had a situation where a directive was given from the tower and it wasn’t followed,” said Miller.

“We’ll do our due diligence to figure out why the directive wasn’t followed and make sure we’re prepared never to make that mistake again.”

Miller admitted closing pit road could have prevented the incident.

“We probably should (have closed pit road). Those calls are very dynamic in that they happen very, very quickly,” he added.

“It’s the race director in charge of pit road open and close and the track services and safety crew in charge of the other.

“We didn’t sync up tonight. We will make sure that we don’t let that happen again.

“It’s very tight at pit-in and as I said, we will analyse the situation and do a better job.”

Kenseth said he had not seen the ambulance in time to avoid hitting Bowyer.

“We were all coming to pit road and I saw an ambulance sitting there,” said Kenseth.

“I looked left of the ambulance at the same time (Jason) Hedlesky (Kenseth’s spotter) yelled at everyone to stop, there was an ambulance just sitting there.

“It was an accordion effect and I just couldn’t get stopped.

“(I’m) not really sure why pit road was open with an ambulance parked there, but everybody stopped and I didn’t see it in time and ran into the car in front of me.

“Still I shouldn’t have hit the car in front of me, but I can’t say I was expecting to see an ambulance blocking me.”

“I was thinking that whoever hits the button to open pit road needs to pay attention to what’s going on, on the race track,” said Truex.

“The emergency vehicles were riding down backstretch next to us as soon as we came off of (Turn) 2 and continued all the way until the opening of pit road.

“Somebody obviously wasn’t paying attention or wasn’t doing their job properly and in my opinion, at this level, it’s inexcusable.”

VIDEO: Replay of the incident