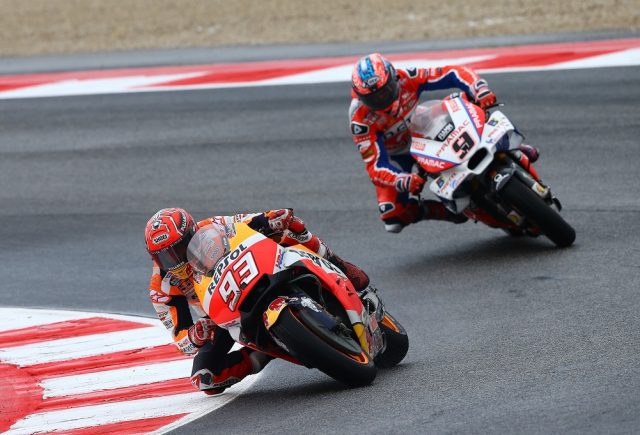 Marc Marquez has expressed his ‘sadness’ at fan reactions to his warm-up crash at the San Marino Grand Prix.

Marquez won the race thanks to a final lap pass of Italian rider Danilo Petrucci and was booed by the crowd while on the podium.

The Spaniard also drew cheers from Italian fans when he crashed his Repsol Honda at Turn 3 during the warm-up.

Marquez was seen ironically blowing kisses back to the crowd after his that crash, and he said he hopes his own fans would never cheer one of his rivals crashing.

“This honestly makes me sad,” Marquez said. “On the podium I can understand, but what I cannot understand is when you crash, the grandstand cheers.

“When we crash, we are riding 300km/h there on the track, we are pushing the limit, our life is there, we can get injured.

“I hope that in the future, minimum my fans, never do this with any rider.

“The feeling is not nice.”

Marquez’s victory over Petrucci moves him back into the lead of the championship with five rounds to go, level with third-place finisher Andrea Dovizioso, another Italian, but ahead on countback.

The Spaniard added that his warm-up crash acted as a “warning” for the race, and that he more cautious in his battle with Petrucci before the final lap.

“The warm-up crash, I think was a good crash – because if not, I would crash in the race,” said Marquez.

“That crash gave me like a warning, and then I was just trying to follow Danilo, very quiet, maybe sometimes I had a little bit more but always tried to control, tried to push in the points I felt good.

“And then last lap I prepared very well.

“When three laps remained, (I) had the possibility to overtake him, but I said I don’t want to fight with Danilo here, in Misano.

The MotoGP race was held after two crash-filled support races in Moto3 and Moto2, with 22 riders crashing in the latter, and Marquez admitted the pressure was on everybody not to crash.

“It was so difficult before the race, because after Moto3, Moto2 race, many crashes from the top guys in the championship,” he said.

“It’s quite difficult to go out because you know you have to finish the race.

“I knew if I crash for some reason and Dovi finishes second or third, will be so difficult the championship.

“But in the end you need to manage this kind of pressure.”

Round 14 of the MotoGP World Championship is at Aragon on September 22-24.