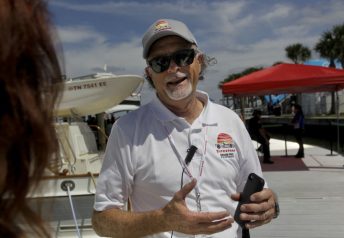 Australian motorsport identity Kim Green is one of tens of thousands of residents who have fled the path of Hurricane Irma as it smashes the US State of Florida this afternoon.

Green is currently out of harm’s way in New Orleans and is being kept up to date with live TV broadcasts as his home region of Tampa-St Petersburg is about to be hit by 180km/h winds, torrential rain and storm surges.

Hurricane Irma has already claimed more than 20 lives and has left more than two million Florida homes and businesses without power.

Meanwhile, Kim’s brother Barry, who, with Kim, won the 1999 Gold Coast IndyCar event with Dario Franchitti and Team Kool Green, is bunkered down at his home in Orlando, Florida.

Orlando is facing high ‘tail’ winds from Irma, but not the full force of the storm which is in the process of smashing the Tampa region and Florida’s West Coast.

Barry spends a lot of his time in the Caribbean which was destroyed by Irma late last week, but set off on a sailing trip earlier this year which resulted in his boat being currently moored in Panama and out of harm’s way.

Kim Green and Kevin Savoree own and operate Green Savoree Racing Promotions which runs the opening IndyCar race of the season in St Petersburg, Florida, in March.

The temporary street course is located right on the water’s edge in downtown St Petersburg and also incorporates the local Albert Whitted Airport.

They also promote the Toronto IndyCar event in July and have owned the Mid-Ohio Sports Car Course since 2011.

“We left St Petersburg on Thursday and intend on staying in New Orleans until the storm passes through,” Green told Speedcafe.com this afternoon.

“We do not know what to expect when we return to St Pete later in the week, but I can’t imagine it will be great.

“They are expecting storms surges of five to 10 feet (1.52m to 3.05m) alone and that’s before we consider the damage of the winds.

“It (leaving) was a pretty easy decision to make once we realised how major the storm was going to be.

“Obviously we are watching it with interest and hope everyone who could not make it out or elected to bunker down will be okay.

“It is certainly a ‘wait and see’ position with the other storms lined up behind.”

Team Green won the 1994 and 1995 IndyCar Championships with Jacques Villeneuve and teamed-up with the French Canadian and future F1 World Champion to clinch the 1995 Indianapolis 500.

The Green brothers grew up in a small town called Waterloo in the South-West region of Western Australia, before heading off to tackle motorsport at the highest levels.

“I think I know who wins this one.”

The Tampa area is also the home of current IndyCar driver and only two-time Gold Coast race winner Sebastien Bourdais and Susie Wheldon, who is the widow of former Florida-based English IndyCar ace, Dan Wheldon.