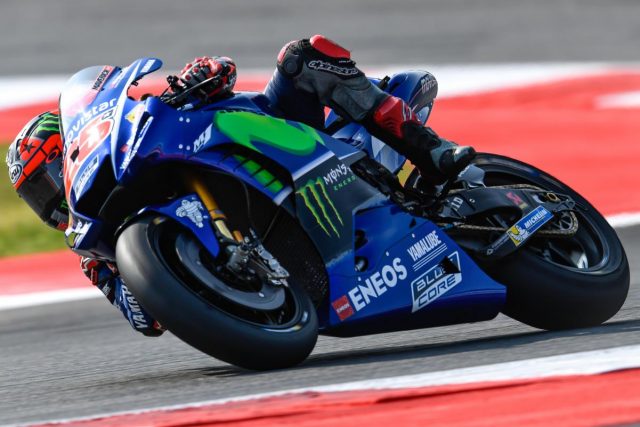 Maverick Viñales has taken pole position for the San Marino Grand Prix as a late effort for Marc Marquez ended with a crash.

Andrea Dovizioso (Ducati Team) had looked to have achieved a first pole since last year’s Malaysian Grand Prix before Viñales (Movistar Yamaha) went faster in the final minute of Q2.

The top three in the championship had already provisionally sat on the front row, with the order ultimately set as Viñales on pole, Dovizioso in the middle, and Marquez (Repsol Honda) third.

Marquez had gone fastest at the end of the first runs, bumping Viñales out of first position at that stage.

Jorge Lorenzo looked like he might take pole position when he went fastest to the third sector at the start of his second run, but only went on to third fastest at the time.

Instead, it was the other factory Ducati of Dovizioso that went to the top of the timesheets, inside the final two minutes of the quarter-hour session.

Marquez then went faster again to the second sector before going down at Turn 13, bringing an end to his session.

The pole is the Spaniard’s first since Mugello, seven races ago, and breaks Marquez’s four-race streak.

Both Jonas Folger and Jack Miller lost their places in Q2 when their respective best lap times were stripped for exceeding track limits.

Miller (Marc VDS Honda) dropped to 14th on the grid and Folger (Tech 3 Yamaha) 16th as a result, the latter having initially been classified fastest in Q1.

The Red Bull KTMs were lead by Pol Espargaro in 17th, while 20th-placed Alex Rins finished one position ahead of Suzuki Ecstar team-mate Andrea Iannone.