Having started from pole, the pair rebounded from a puncture on Lap 12 to reclaim the lead, winning comfortably from the A2 Class Holden VE HSV GT of Chris Lillis and Nathan Callaghan.

There was late pressure for second from the C Class Renault Megane driven by Tyler Everingham and Calum Jones, with Everingham at the wheel, however a time certain finish ultimately robbed the youngster of an opportunity to make a move, settling for third outright and C Class honours.

Class B was won by Michael Auld and Richard Bloomfield in a Holden VE HSV, while Class D went to brothers Blake and Kyle Aubin in a Renault Clio.

Father and daughter duo of Mark and Amy Griffith took out Class E in a Toyota Echo, holding out in front of Jason Walsh and Paul Currie who were making swift progress to end the race second in class.

George Miedecke had led the race in the early stages despite the #67 Ford Falcon, which he shared with Jeremy Gray, dropping a cylinder on the opening lap before proving terminal on Lap 42.

An incident for the #55 Suzuki Swift in the third hour saw the race effectively red flagged after it left the track at Southern Loop.

Though the Safety Car was deployed, damage to a tyre wall saw officials elect to stop the field on the front straight for 10 minutes so the barrier could be repaired.

Victory for the Sherrins, by over a lap, also handed the BMW M4 its first win in the Australian Production Car Series after a troubled start to its 2017 campaign.

The final round of the Australian Production Car Series takes place at Wakefield Park on November 17-19. Jon McCorkindale and Michael Anderson have claimed their first V8 Touring Car Series victories, with McCorkindale taking out the round at Phillip Island.

Mixed conditions again dominated the day’s running, with McCorkindale emerging as victor in Race 2 when the weather was at its worst.

Tyler Greenbury struggled in the conditions, slipping down the order to finish the race just fifth after starting from pole.

Michael Caine claimed second place ahead of Jack Smith in third before Smith recorded a Race 3 retirement after a clash with Greenbury.

Leading the race, Smith became an innocent victim when Greenbury’s front right tyre came off the rim, firing the Commodore driver off the road on the approach to Turn 4 and collecting the hapless Smith.

Both were retirements on the spot, allowing Anderson to sweep through for his first win in the series, with McCorkindale second and Chris Smerdon third.

The fifth and final round takes place at Sydney Motorsport Park on October 27-29. 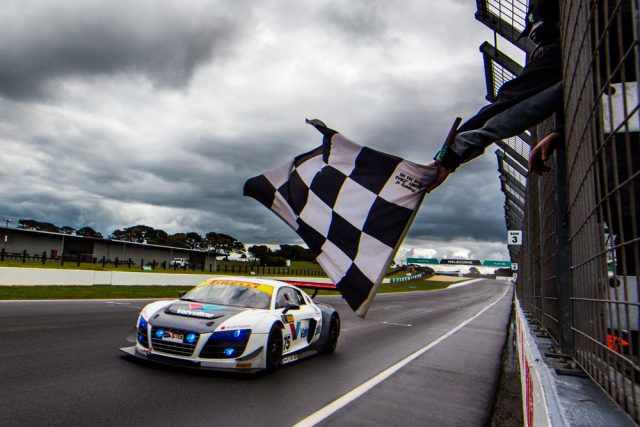 Series leader Steve McLaughlan climbed from eighth to first in the second Australian GT Trophy Series race of the weekend at Phillip Island.

The Audi driver moved forward during the early stages, battling with Wayne Mack for third before claiming the race lead during the pit stop sequence.

Race 1 winner Rod Salmon had held down top spot up to that point and ultimately trailed McLaughlan to the line to claim second place and the round win.

Mark Griffith won the Challenge class after taking maximum points across the weekend in a Ferrari F430 GT3 as Richard Gartner’s title tilt came to a halt when he was disqualified from the race after missing the pit stop window.

It leaves just McLaughlan and Salmon in the title fight ahead of the last race round of the season at Wakefield Park on November 17-19.

The inaugural Australian Prototype Series has been won by Mark Laucke despite a weekend of mixed results at Phillip Island.

Laucke ended Race 2 on Sunday morning in last before climbing back to second in dry conditions in Race 3.

Phil Hughes claimed the day’s opening race after a strong performance that saw him win the 10 lap race by 11.046s.

Hughes then fell to fourth in the final race of the weekend, which was won by Aaron Steer with Laucke second and Terry Peovitis third.

Despite finishing fourth in race 3, victory in Races 1 and 2 were enough to secure Hughes the round win.