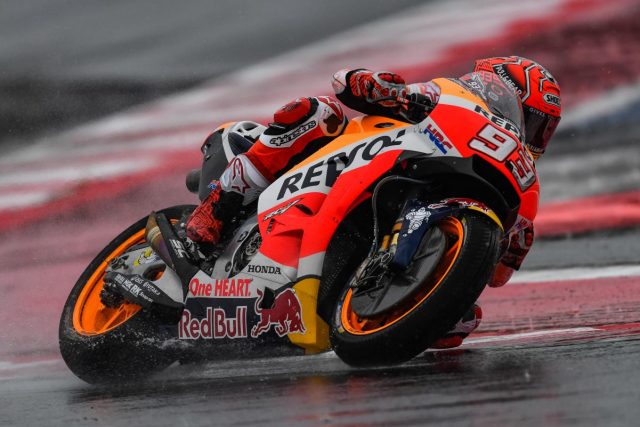 Marc Marquez has denied Danilo Petrucci a first MotoGP race win with a stunning final lap at a wet Misano.

Marquez’s win ties up the top of the world championship as Andrea Dovizioso finished third, while Jorge Lorenzo crashed out while leading.

Marquez (Repsol Honda) started well from third but Lorenzo (Ducati Team), who came from the middle of the second row, braked deep into Turn 1 and emerged with the lead.

Lorenzo streaked out to a lead of well over three seconds before he highsided and crashed out of the race on Lap 7.

That incident put Petrucci (Pramac Ducati) into the lead, who had charged through the field in the early laps, ahead of Marquez and Dovizioso (Ducati Team).

Dovizioso had briefly got ahead of Marquez just prior to Lorenzo’s crash, but assumed third as the 28-lap race settled down during its middle portion.

However, Marquez kept in touch with Petrucci and the top two put the hammer down in the latter stages.

Petrucci set the fastest lap on Lap 20, Marquez went faster next time around, then Petrucci took it back on Lap 22 as Dovizioso fell multiple seconds behind.

While Dovizioso appeared to give up the chase with his championship tilt in mind, Marquez continued to go with Petrucci and closed right up with three laps remaining.

The crucial move came at the start of the last tour of the circuit, when Marquez got under Petrucci at Turn 1 and reeled out the fastest lap of the race, winning by 1.19s.

“When I saw that we started to open a gap on Dovi, at one moment I thought about staying in second position but then on the last lap I say, ‘I try,’” explained Marquez.

“This championship is really tight; five points (the difference between first and second) can be a lot in the end.”

Petrucci came home second and Dovizioso a distant third, with #04 now second in the title race on a countback only.

“Mixed,” declared Petrucci when asked about his emotions.

“It’s a great result but another time very, very close to the win.

“I have nothing to regret but it is a second place.”

Miller had run fifth until as late as Lap 20, when Pirro got by, taking the chequered flag one position lower.

He still managed to finish one position ahead of Dani Pedrosa (Repsol Honda), who had no pace at all in the wet conditions.

Johann Zarco secured the final point in 15th when he pushed his Tech 3 Yamaha across the finish line.

The championship continues in Aragon, in northeast Spain, on September 22-24.

Championship points: After Round 13