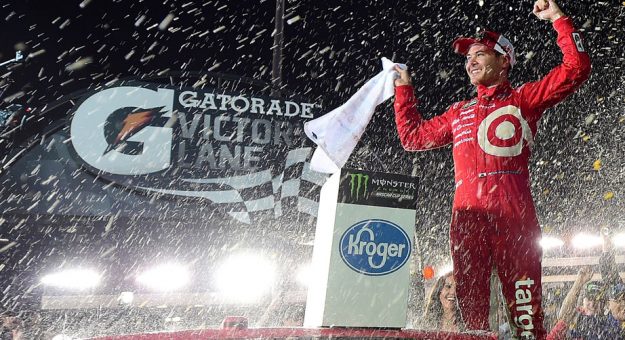 Kyle Larson has scored his fourth win of the season with victory at Richmond as NASCAR now heads into its version of the playoffs over the final 10 races of the season.

On a night where many of the sport’s big names needed to win to make it into the Playoffs, the race had plenty of ups and downs for many crews.

It came down to a green-white-chequered finish with Larson’s crew getting him off pit road first and he got the jump as the green flag fell.

He kept things clean, while others behind tried to push their way forward. Even on the last lap Denny Hamlin and points leader Martin Truex Jr. came together and found the fence.

“I have the greatest team out here and the best pit crew, they were money all night long,” said Larson.

“This win is a huge congrats to them.

“It came down to the last re-start there and after I cleared them into Turn 1 we really had what was needed to win.

“I am really pumped, I feel that going into the playoffs we have what it takes to really fight for this thing.”

Early on the race was dominated by Matt Kenneth, but his race hopes ended in strange circumstances.

In what can only be described as a comical scene, Kenseth’s race ended when under yellow the field came to pit road to find an ambulance on the entrance. All the leaders were bottled up and Kenseth slammed into the back of the car of Clint Bowyer in front of him and damaged the radiator.

All crews were left furious as the pit road was open, but the ambulance blocked the field, with many cars having to drive around the commitment cone.

NASCAR issued a statement saying that the ambulance did not follow direction from race control. All those cars that went outside the commitment line were not penalised, but that was little comfort for Kenseth; although he did qualify for the playoffs.

16 drivers have qualified for the Playoffs, with the first group of four drivers to drop-off after the first three rounds.

Of the leading drivers to miss the playoffs were Dale Earnhardt Jr, Bowyer and Joey Logano. Logano, who finished second in the race and did take a race win at Richmond earlier in the season. However, that earlier race win didn’t count towards the playoffs after his car failed technical inspection post event.

In the first season under this race format, Truex Jr. enters the playoffs as the top seed. He leads all drivers with four wins; worth five playoffs points apiece. He also won a series-best 18 stages (worth one playoff point each). Additionally, Truex is the Monster Energy NASCAR Cup Series 2017 Regular Season Champion. Winning the regular-season title adds an additional 15 playoff points.

VIDEO: Incident with the ambulance