Jordan Love has won the Porsche GT3 Cup Challenge series despite a crash on the last lap of the weekend which opened the door for Brenton Grove to win a dramatic final race at Phillip Island.

The Elite Class title went to Anthony Gilbertson after he and Sam Shahin came together early in Race 1, with neither reaching the flag.

They then climbed into the midfield in Race 2, Shahin sixth and Gilbertson seventh before they were again both retirements in the final race of the weekend.

Love had won the opening two races of the day, taking Race 1 comfortably from John Steffensen, who had a race-long duel with third placed John Karytinos.

The order remained the same in Race 2, with Grove climbing to fourth having started Race 1 from the rear of the grid after crashing out in Practice.

A clash eliminated Steffensen with Gilberson and Shahin midway through the final race, before Love crashed out while battling with Grove.

Despite his retirement, Love claimed the GT3 Cup Challenge title and John Karytinos the Elite class round. Victory in the first Australian GT Trophy Series race of the weekend has moved Rod Salmon to within 33-points of Steve McLaughlan in the title race.

Salmon pressured McLaughlan into an early mistake, only for Travers Beynon to pounce and take the race lead.

Beynon then resisted Salmon’s pressure until the pit stop sequence, after which he held a commanding 18-second advantage.

However a spin late in the race as he worked through traffic saw Beynon retire from the race, allowing Salmon through for victory ahead of Wayne Mack and Mathew Turnbull.

The Australian GT Trophy Series has one race tomorrow for the penultimate round of the season, Race 2 scheduled for 1035. 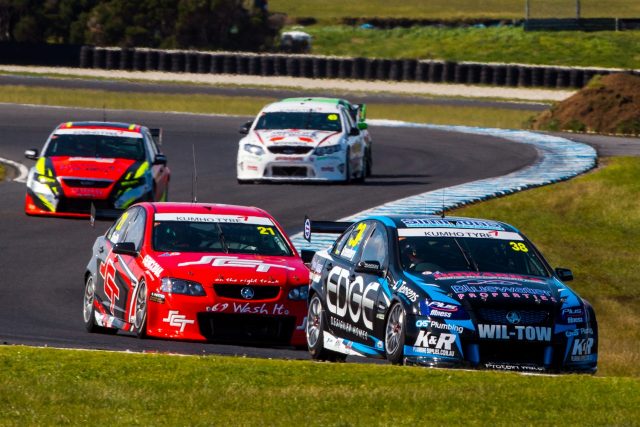 There was just 0.2s between Greenbury and Smith at the flag, the pair more than six seconds clear of the third place battle.

Less than a second separated the two Falcons of Anderson and fourth placed Jon McCorkindale.

Garry Hills spun out of the race at the end of the opening lap, losing control on the exit of the final turn to draw the safety car.

Two races follow tomorrow to complete the penultimate round of the series. Sherrin had been fastest for much of the session only to lose top spot to the Mitsubishi Evo X.

Starting third will be Will Brown in the Mercedes-AMG A45, alongside Jeremy Gray in a Ford Falcon FG.

A2 saw Nathan Callaghan the fastest, starting from ninth, while Andrew Turpie claimed the fastest lap in a competitive class D , starting 11th on the grid.

Mark Griffith was the quickest in class E, and will start 16th on the grid.

The series will be back on track tomorrow for a warm up at 1015 ahead of their 4 Hour endurance race starting at 1250.

Phillip Hughes hung on to win the opening Australian Prototype Series race of the weekend from Aaron Steer and Chris Sutton.

Sutton had qualified on pole, but was soon overtaken by Hughes on the opening lap, who held the lead to the finish.

Steer also found a way by Sutton, moving into second place after seven of the race’s ten laps.

Series leader Mark Laucke finished fifth, consolidating his position as the leader yet at the same time ceding some ground to rivals Hughes and Sutton.