Evans and Skutz on top at Newcastle SXS

Evans and Skutz on top at Newcastle SXS 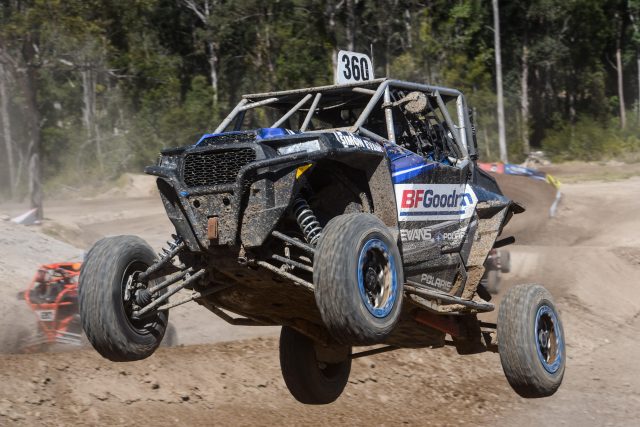 Simon Evans and Ivan Skutz brought their ‘A’ games to Newcastle at the fifth round of the 2017 SXS Australian Championship.

Amidst a high quality field that included 2016 Champs, Ewan McClue and Cody Crocker, Evans and Skutz dominated proceedings on the heavily reworked track at Ranch MX. Huge motocross style table top jumps, step ups and switchbacks were the order of the day, combined with the land rush starts and Joker Lane unique to the SXS Championship.

In the naturally aspirated Superlite A Class, Skutz took a clean sweep of all six races in his #668 Yamaha YXZ to amass a winning total of 30points. Clint Debner and Dan McKenzie ensured it was an all Yamaha podium, with Debner driving his #18 Yamaha into second with 23 points, just a single point ahead of #5 Dan McKenzie.

Evans has been building momentum towards a round win all season and today drove his #360 BFGoodrich Polaris on to the top step of the podium in the turbo Superlite B category with 41 points, keeping the #698 CanAm Maverick X3 of Peter Carr at bay on 36 points. Hard charging Japanese driver, Tadamitsu Niihori rounded out the podium in his #14 Polaris with 32 points. Cody Crocker helped fly the flag high for Polaris, posting the quickest lap of the day, a 1:58.9.

With one round remaining in the SXS Australian Championship, Ivan Skutz has cemented his position at the top of the Superlite A leaderboard with 161 points. While a calculated performance today keeps Ewan McClue out in front amongst the Superlite B’s with 172 points.

The sixth and deciding round the 2017 season will be held at Broadford, Victoria on October 28th.