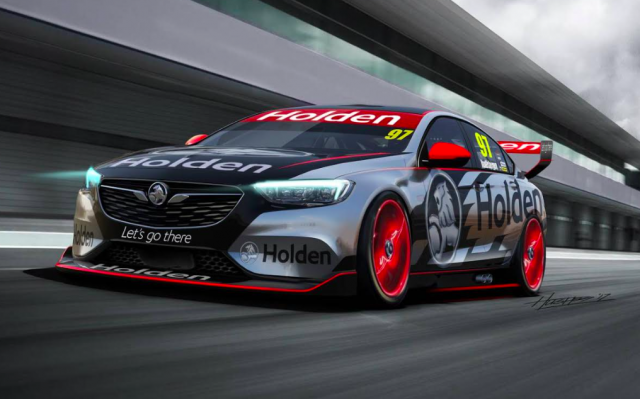 Triple Eight is ramping up the development of the new Holden ZB Commodore Supercar ahead of its maiden test later this month.

The factory Holden squad has been tasked to design, build and develop the latest iteration of the Commodore Supercar, based on the European Opel Insignia sedan.

Such an undertaking has coincided with the development of the squad’s 3.6 litre twin turbo V6 engine, with tests taking place earlier this year.

While the full roll out of the V6 power unit is not expected until 2019, the development of the ZB Commodore, which is yet to break cover, has now become a primary target.

The team aims to complete the aero testing component of the car’s homologation process before the end of the year.

Triple Eight has been heavily involved in the homologation of previous Holden and Ford Supercars, but this is the first time it has been the official team to deliver a brand new car.

Team manager Mark Dutton says interest from teams looking to upgrade to the ZB for 2018 is steadily growing.

As previously reported, a maiden test for the ZB is expected later this month with the team due to finalise the location before the end of the week.

Regulations dictate that a team can undertake aero testing under the observation of Supercars technical team before the car undertakes the category’s official homologation testing.

“It is quite difficult to find places to be able to do the types of tests that we need to do. It is not just a matter of coming out to Queensland Raceway,” Dutton told Speedcafe.com.

“It (the V6 engine) is definitely not the primary target at the moment because it is not racing next year. We need to get this ZB ready.

“We have set some pretty difficult targets for ourselves by how early we want the car to be done.

“We want to be done and dusted (aero testing) prior to the end of the year to give all the Holden teams out there an opportunity to get their cars built without working 24/7 in January and February.

“There has been an influx and there are lot of keen people to upgrade.

“It is not even a finished design yet.

“It is a good reflection of how the teams are respecting the work that everyone is doing at Triple Eight that they want to order it.”

In order to meet Supercars’ aero targets, Triple Eight is in the process of developing a range of aerodynamic options that can be fitted to the car to adjust downforce levels.

“You do have to make various parts because with the aero it is very difficult,” Dutton added.

“You have to hit targets and not just your own targets, there are targets made by Supercars.

“We are working hard to get the car finished but with various aero options. If we need more front or rear or if there is too much (downforce) then there is an option to do that.

“We are working very hard to have options ready so we don’t have to cut up a splitter or add a gurney to put the jigsaw together.”