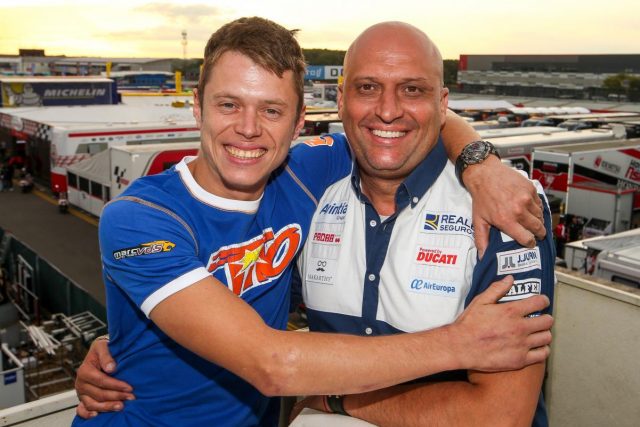 Tito Rabat will switch to the Avintia Ducati team for next year’s MotoGP season.

Rabat currently rides alongside Jack Miller at satellite Honda squad Marc VDS, which will welcome both Thomas Luthi and Franco Morbidelli from Moto2 in 2018.

The Spaniard will return to Avintia for his third spell at the team, having debuted with them in the 125cc class in 2005 and returned in 2009.

“I’m very happy to sign with Reale Avintia Racing and to race with Ducati in 2018,” said Rabat, who will ride a Ducati Desmosedici GP17.

“Now I have a new opportunity to demonstrate that I can be fast and competitive in MotoGP.

“I’ll be racing in a team that I know since my childhood and with a bike that I think will suit my size and my style to perfection. This is a great opportunity and I’ll make the best of it.”

Team principal Raul Romero was quick to point out his delight in having Rabat back in the team.

“He rode his first race for me in the Spanish Championship and he made his debut in the World Championship with my team.

“During his career, he raced in several teams, but always comes back home.

“I’m convinced that this will be the pinnacle in his career and that we’ll achieve great results together with Ducati.”

Rabat finished 21st in the championship as a premier class rookie last year and is currently 18th in the points.

His appointment means that there is only one seat, that of his future team-mate, unconfirmed for 2018.

MotoGP resumes this evening (AEST) with practice for the San Marino Grand Prix.