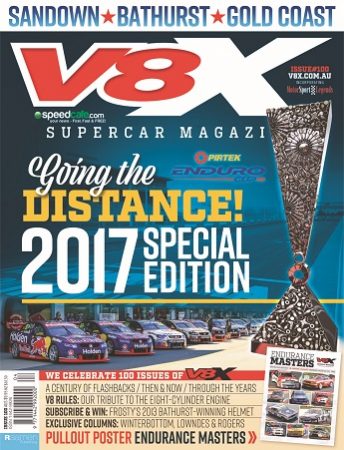 V8X Supercar Magazine issue #100 is on sale now in print and digital form.

Issue #100 is a special 2017 Pirtek Enduro Cup edition with a detailed preview of the long-distance events at Sandown, Bathurst and the Gold Coast, while also celebrating V8X Supercar Magazine’s 100-edition milestone.

Going wild: Profile the wildcard entrants who stepped up into the main game in 2017.

Our maiden voyage: Revisit the very first issue of V8X Supercar Magazine from 2000.

Through the years: Tracking the history of Supercars through V8X Supercar Magazine covers.

V8 rulers: Exploring the history of the V8 engine in Australian touring cars.

Analysis: Supercars’ road relevance: Where the manufacturers are positioned heading into Gen2.

Analysis: Doubling up at Bathurst. What are the prospects for Supercars at Bathurst’s proposed second circuit?

Mark Winterbottom column: Frosty on the arrival of the next-generation racers.

Craig Lowndes column: Lowndes on signing on with Triple Eight into Gen2.

Garry Rogers column: Rogers on his team’s progress in 2017.