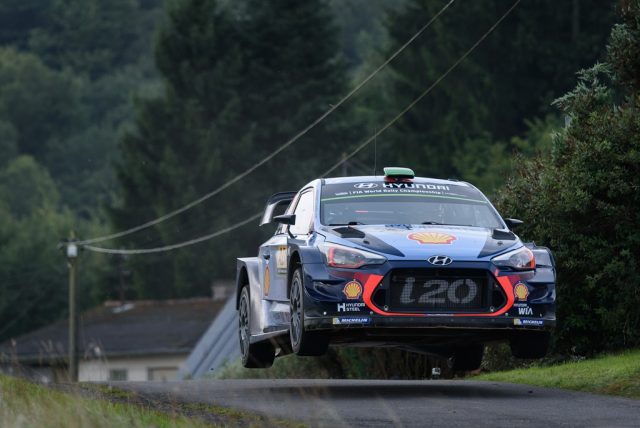 Hyundai Motorsport is considering entering four cars as early as the final two rounds of this year’s World Rally Championship and also in 2018.

Team principal Michel Nandan has revealed that the team could run all of its currently contracted drivers plus Andreas Mikkelsen, and confirmed that the current plan is for Hayden Paddon to return for Great Britain and Australia.

Mikkelsen will take over Paddon’s seat in Spain and also see out the season with Hyundai, meaning that Dani Sordo would likely be dropped for the last two rounds.

Hyundai’s original announcement concerning Mikkelsen did not go into detail regarding line-ups for Great Britain or Australia.

However, Nandan suggested that championship contender Thierry Neuville could be joined by all of Mikkelsen, Paddon, and Sordo at those rallies.

“We have looked at it and we could put four cars,” Nandan told WRC Live of his team’s plans for the rest of 2017.

“It doesn’t mean it will be like that but we’re looking at that because it’s also in the interests of Hyundai for the championship.”

The move to install Mikkelsen for the last three rounds of the season is publicly being stated as a means of regaining ground in the manufacturers’ championship, but could also help take points off Sebastien Ogier, who leads Neuville by 17 points.

When asked what the strategy meant considering that each of Neuville, Paddon, and Sordo are contracted for 2018, Nandan confirmed that a four-car campaign is a possibility next year.

“It’s true we are looking at the possibility of four cars but for this we need to have some approval because budget is concerned for that,” he explained.

“This should be decided in the next weeks.”

Under WRC regulations, manufacturers’ championship points may be earned by up to three nominated drivers per team.

However, teams must also “specify which drivers will be eligible to score points in each rally before the closing date of entries of the rally concerned,” meaning that Hyundai could choose which three of its four drivers could contribute to its manufacturer tally before each rally.

In the Rally Australia example, Hyundai would most likely nominate Mikkelsen, Neuville, and gravel specialist Paddon, and not count Sordo.

At a tarmac rally, however, Sordo might count in place of Paddon.

Paddon had been expected to return to driving duties in Britain and at Coffs Harbour in any event, and Nandan also confirmed that this is the case.

“In the moment he will, yes,” Nandan told WRC Live when asked if Paddon would be back for those two rallies.

Rally de España takes place on October 5-8, before Wales Rally GB on October 26-29, with the season concluding on the Coffs Coast on November 16-19.