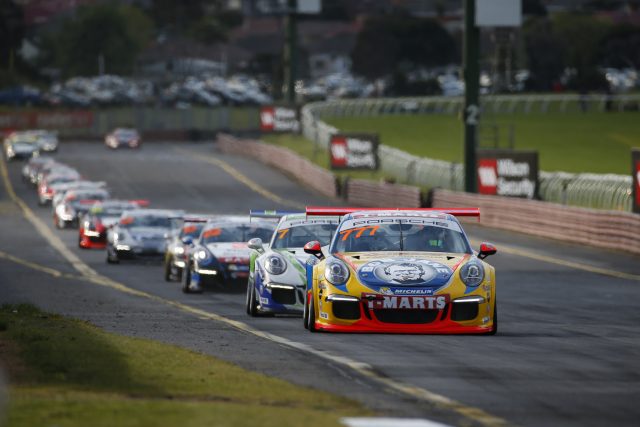 Porsche Carrera Cup Australia has confirmed that its own Endurance Cup will be run as three longer third races at its remaining three rounds.

Porsche Cars Australia announced the initiative upon the release of its 2017 calendar last year.

As expected, Race 3 at each of Sandown, Bathurst, and the Gold Coast, which also form Supercars’ Pirtek Enduro Cup, will be longer races of 40-45 minutes each.

Most Carrera Cup races are 20-25 minutes in duration, though there will still be no need for refuelling due to races being less than an hour long.

The points awarded for those three longer races count towards an Endurance Cup title for both Outright and TAG Heuer Carrera Challenge ranked drivers, consistent with the championship generally.

The format mirrors that of the second-tier GT3 Cup Challenge’s Jim Richards Endurance Trophy, which was secured at Queensland Raceway in early August by Jordan Love.

At Sandown, Sunday’s Race 3 is scheduled for 25 laps long, making for a total distance of 77.5km.

Only a Friday night race held at Surfers Paradise in 2004, which ran 20 laps for a total of 89.4km on the old circuit, will have ever been longer.

“It’s tremendous to be able to extend our overall race time at some of the most popular events on the racing calendar at three remarkably different race circuits.

“We hold a similar mini-series, the Jim Richards Endurance Trophy, in our GT3 Cup Challenge series, which has proven extremely popular since its 2011 introduction, so replicating this format for Carrera Cup was an easy decision.

“The longer Endurance Cup races are a true test of fitness for our drivers, especially at a circuit like Surfers Paradise, but also adds the challenge of tyre management.

“We are always looking for new ways to improve our product and I believe this is a great addition to the series entering the final stages of the season.”