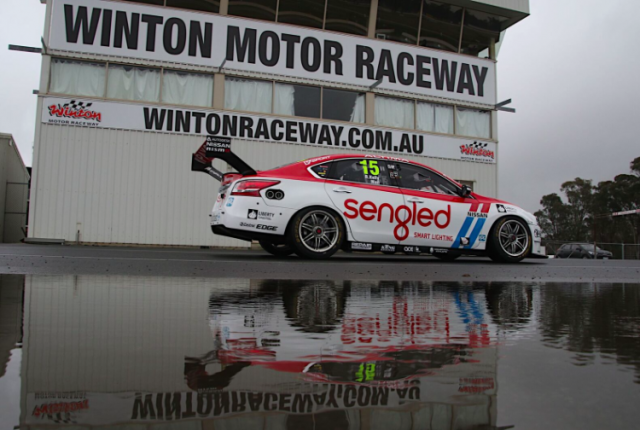 Nissan Motorsport were among the teams to abandon its test day

Inclement weather has forced teams to abandon their pre-enduro test day at Winton.

A group of Victorian squads including Prodrive, Nissan Motorsport, Preston Hire Racing and Garry Rogers Motorsport were at the Winton track hoping to gain valuable mileage ahead of next week’s Wilson Security Sandwon 500.

The region has suffered from a period of wet weather which left the track wet this morning when teams planned to test.

Further showers arrived during the morning restricting the ability to complete any meaningful running.

The quartet of squads were able to log laps on the wet track surface before Prodrive, Nissan Motorsport, Preston Hire Racing and Garry Rogers Motorsport’s main game team abandoned the day, prior to the 11am cut off, ensuring the teams do not lose an allocated test day.

GRM is continuing to run its #99 Dunlop Super2 Series car for Mason Barbera.

Nissan Motorsport is planning to return to the track tomorrow to conduct its test day, while Prodrive and GRM have elected not to take a chance on the possibility of improved weather conditions on Thursday.

Prodrive is looking into scheduling a test at Winton early next week.

The Albury squad expects to reschedule its test after the Vodafone Gold Coast 600 from October 20-22.

The operation has been able to practice driver changes at its workshop to aid their preparations.

“The last couple of test we have had to abort because of the conditions, so that has been frustrating,” team owner Brad Jones told Speedcafe.com.

“We will probably do a test after the Gold Coast.

“There has been a lot going on at the workshop with driver changes and brake pad changes and things like that.

“We are so limited with opportunities in terms of test days that you don’t want to burn half a test day if its wet.”

Meanwhile, Mobil 1 HSV general manager Mathew Nilsson was satisfied with his team’s work on Tuesday despite the conditions.

“It was an interrupted test day, but we still managed to achieve a majority of what we set out to achieve,” said Nilsson.

“Being a pre-endurance test, obviously a key was ticking off the endurance aspects like driver changes, pit stop practice and all the one per cent stuff.”

“That preparation can have as much of an impact as car speed come race day, so we dotted the i’s and crossed the t’s so to speak.

“We also continued down the direction we have taken in the previous events.

“Having the co-drivers down getting their eyes in before they jump back in their cars next Friday was also advantageous, so we are really looking forward to having them back to race.”

Triple Eight, Tekno Autosports and Shell V Power Racing are however all in action at Queensland Raceway today.