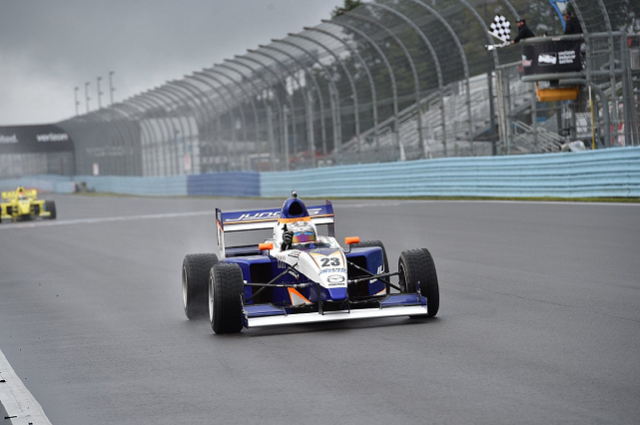 Australian Anthony Martin has missed out on the Pro Mazda Championship after Victor Franzoni won both races at Watkins Glen.

Martin (Cape Motorsports) had actually snatched the lead from the pole-sitting Franzoni (Juncos Racing) on Lap 1 of the Saturday race, but Franzoni was faster and eventually got by after an early Caution.

Martin instead had to focus on his mirrors, holding off Carlos Cunha (Team Pelfrey) to finish second.

Franzoni again qualified on pole for the last race of the season and quickly gapped the field on his way to a comfortable win in wet conditions.

Starting from fifth due to a two-position grid penalty, Martin made up those places at the start and set about pressuring Cunha.

An attempted move at Turn 1 on Lap 4 caused contact which saw Martin spin, though the Kalgoorlie native nevertheless finished third.

“I was pushing 150 percent out there with the championship on the line,” said Martin.

“It sucks to be the first loser, as I call it, but I gave it my all. I didn’t leave anything out there.

“I’m very disappointed not to take the championship but I had a great time this year.” Brendon Hartley leads the field away at the start

Porsche has dominated Round 5 of the World Endurance Championship at Mexico’s Autodromo Hermanos Rodriguez, with Earl Bamber, Brendon Hartley, and Timo Bernhard leading a one-two for the marque.

Hartley and Bernhard put the #2 919 Hybrid on pole for the first time this season, with the former starting the race.

They would lead 235 of 240 laps of the six-hour race, with the five spent in second due to pit stops.

Hartley started and got out to a nearly 30s lead in the early stages when Nick Tandy in the sister #1 Porsche copped a drive-through for pit lane speeding.

In the end, the Kiwi pair and the German beat Tandy/Andre Lotterer/Neel Jani by seven seconds as Bernhard cruised home.

The Toyotas were never in the fight, with Sebastien Buemi/Kamui Kobayashi/Kazuki Nakajima finishing a lap down in third in the #8 TS050 Hybrid, 18s ahead of team-mates Mike Conway/Kamui Kobayashi/Jose Maria Lopez in car #7.

The third straight win for Bamber/Hartley/Bernhard extends their championship lead with the 6 Hours of COTA next to come on September 14-16. Robby Gordon and Matt Brabham have each won a race in Stadium Super Trucks at Watkins Glen.

The Saturday race was run in two parts due to a delay in the program, with Shaun Richardson the early leader when it restarted.

Brabham took over the lead but skated off in wet conditions as racing resumed after the first Competition Caution, allowing Gordon into the lead.

Brabham recovered ground and Paul Morris joined in to make a three-way fight for the win in a frantic final lap, with Gordon ultimately prevailing over Morris and Brabham.

They were the main protagonists again on the Sunday, Brabham taking out that encounter from Gordon and Morris.

The next round is the FB Life Festival in China on October 6-7. Kyle Kaiser has been confirmed as the Indy Lights champion as Aaron Telitz won the final race of the season at Watkins Glen.

Kaiser (Juncos Racing) need only have started the race to seal the title, qualifying 10th and going on to finish seventh.

Telitz (Belardi Auto Racing) had qualified third but made a three-wide move out of the first corner in the rain, passing team-mate Santi Urrutia for second.

He passed Colton Herta (Andretti Steinbrenner Racing) into the same corner next time around, and despite coming under pressure from Urrutia after a red flag period for heavy rain, took his second win of the season. 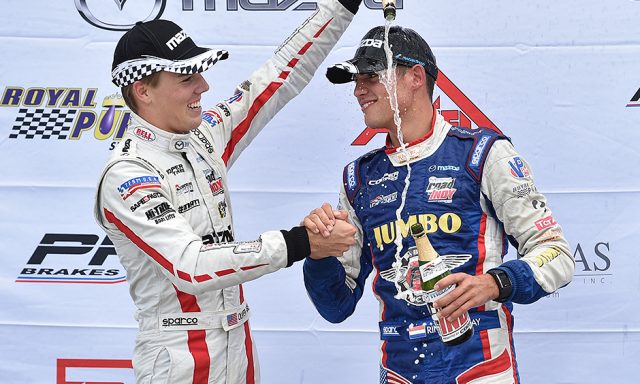 Oliver Askew has clinched the USF2000 Championship despite his nearest rival Rinus VeeKay winning the finale at Watkins Glen.

VeeKay (Pabst Racing Services) rounded up the pole-sitting Askew (Cape Motorsports) at the first corner and disappeared to a nearly 10s win.

However, second position was enough to Askew to wrap up the title. Luca Ghiotto won one race and had another taken off him amid a messy conclusion to the Feature Race at Monza.

Ghiotto (Russian Time) led into the final lap of the Feature but straight-lined the Rettifilo while under pressure from Nyck de Vries (Racing Engineering).

Championship leader Charles Leclerc (Prema Powerteam) then attempted to pass de Vries on the outside on the run to Curva Grande but the two hit, and would finish 17th and 18th respectively.

A five-second post-race penalty relegated Ghiotto to fourth and handed the win to his Italian compatriot Antonio Fuoco (Prema Powerteam).

Ghiotto drove from fifth on the grid to win the Sprint Race, with Leclerc climbing to ninth.

Leclerc remains in the box seat to win the championship given both he and his nearest rival Oliver Rowland (DAMS) failed to score any points during the weekend after the latter lost a wheel during the Feature. 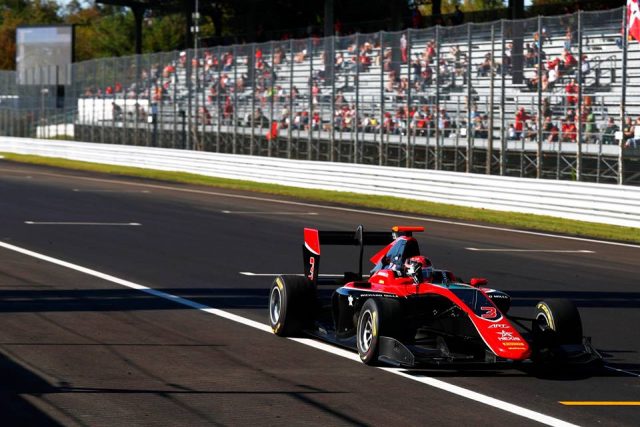 George Russell won the only GP3 race of the weekend to be run at Monza due to heavy rain on the Saturday.

Nirei Fukuzumi (ART Grand Prix) gave up his pole position, set on practice results after qualifying was washed out, due to a mechanical problem before the start.

Russell, Jack Aitken, and Anthoine Hubert engaged in a huge battle for the lead, interspersed with Safety Car periods due to big crashes for Leonardo Pulcini and Alessio Lorandi, and then also for Juan Manuel Correa and Arjun Maini.

All three remaining ART drivers took turns leading the race before Russell earned a slight buffer by the time another Safety Car was called for a Niko Kari off, with the race not restarting thereafter.

Russell led Aitken and Hubert to the podium, extending his points lead heading to the penultimate round at Jerez (October 6-8). In Friday night’s opening race, a catch-up due to a washout earlier in the season, Bergmeister (#58 Wright Motorsports Porsche 911 GT3-R) took the lead at the first corner and Long kept them there in a comprehensive display.

Mancinelli started the #31 TR3 Racing Ferrari 488 on the Saturday and put Schiro in position to take over the lead mid-race and win.

Bergmeister salvaged eighth after Long was turned around early then hit with a drive-through for jumping the start.

On the Sunday, Dalziel drove the #2 CRP Racing Mercedes AMG GT3 from fifth on the grid to third before handing over to Morad to take victory.

Jordan Taylor/Michael Cooper (#8 Cadillac Racing Cadillac ATS-V.R) took out the SprintX title despite a DNF due to hitting the #31 Ferrari on the opening lap of that race.

The Sprint format is in play for the next round at Sonoma on September 15-17. Johan Kristoffersson has become the first man to win four rounds of the World Rallycross Championship in a row in France.

Kristoffersson led all the way in the final to extend his championship lead over Volkswagen RX Team Sweden team-mate Petter Solberg.

Sebastien Loeb and Mattias Ekstrom rounded out the podium.

Round 10 takes place in Latvia on September 15.