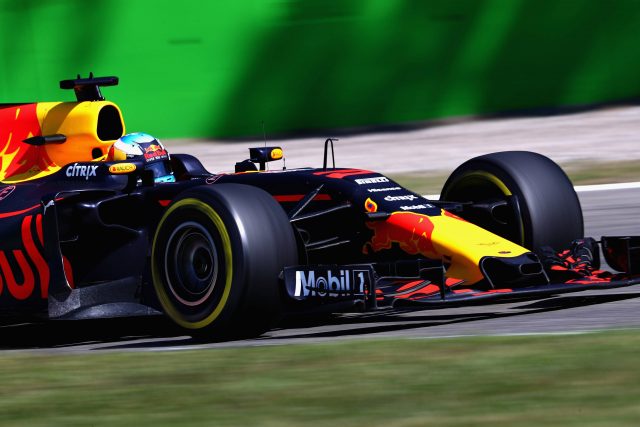 Daniel Ricciardo earned Formula 1’s ‘Driver of the Day’ award for the second time this season following a ‘fun’ recovery to fourth at the Italian Grand Prix.

The Red Bull driver managed to scythe his way from 16th on the grid featuring a series of impressive overtaking moves during the 53 lap race at Monza.

Ricciardo headed into the race with a 25 place grid penalty after undertaking an engine and gearbox change prior to qualifying.

Despite the penalties, the Australian produced a strong long opening stint on the soft tyres to climb into the top five, which included an eye catching dummy pass on Force India’s Sergio Perez at the Roggia chicane.

After rejoining the race in fifth following a pits stop with 15 laps remaining, Ricciardo pulled off a late lunge on Ferrari’s Kimi Raikkonen to claim fourth.

Utilising the faster super-soft rubber, the 28-year-old then set his sights on reeling in Sebastian Vettel’s Ferrari for third, but was unable to challenge for a podium before the chequered flag.

Lewis Hamilton won the race as he led home a Mercedes 1-2 on Ferrari’s home soil.

“We were closing down the podium,” said Ricciardo, who was voted by the fans as the Driver of the Day.

“At one point we were catching Seb about a second a lap and at that rate we would have caught him by the final lap, but then he was able to turn it up a bit. I was using every bit of my tyre that I could.

“It was fun. I definitely had some good overtakes and it was a little bit like the race in 2014 when we came through the pack. Hopefully we created a few more highlights.”

Ricciardo paid tribute to his team for making the strategy call which allowed him to salvage a strong result.

The five-time grand prix winner enjoyed his fair share of luck after suffering contact with Haas F1’s Romain Grosjean on the opening that damaged the Frenchman’s front wing.

“It went better than I thought,” added Ricciardo of the strategy.

“There was a little bit of contact in the first chicane and being in heavy traffic the tyres were feeling quite gooey and I didn’t feel I could get much out of them.

“However once we cleared a few guys and got clear air it paid off. The team got the quickest pit stop, so thanks to them, and this gave us a chance at the end.”

Ricciardo also admitted that he particularly enjoyed his pass on Raikkonen in the closing stages.

“I would have done it (the move) on anyone to be honest,” he said of the move.

“When you are coming through the field with that momentum it doesn’t matter who you come up against.

“I was aware the deeper I got towards the front, the harder the overtake would be. In the end, I had blinkers on for the move and was happy to pull it off.”

Red Bull boss Christian Horner hailed the effort from Ricciardo, labelling his driver as one of the best on the grid when it comes to overtaking.

“He didn’t have a great start and I think he was 16th and he then just started making his way through. He made some phenomenal overtaking moves,” said Horner.

“I think he is one of the best overtakers out there. His judgement of being to brake late and still make the apex is phenomenal. It was an incredible drive.”

Red Bull is expected to offer a much stronger showing when the championship visits Singapore from September 15-17.

When asked abut his chances at the tight and technical Marina Bay street circuit, Ricciardo joked, “I think we will lap the field in Singapore so I’m looking forward to that.”