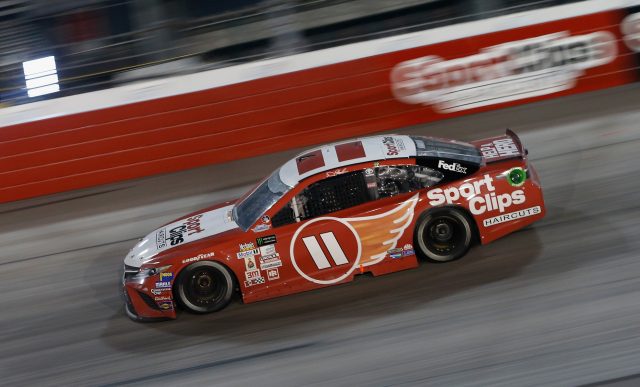 The “Flying 11” of Hamlin at Darlington

Denny Hamlin has overcome a pit stop miscue to win the Southern 500 at historic Darlington Raceway in South Carolina.

Hamlin was in control ahead of the final round of pit stops when he missed the pit road entrance and came close to hitting the concrete divider. In all he lost 20 seconds in green flag running and slipped back to third behind Kyle Busch and Martin Truex Jr.

Hamlin put his head down and attacked; first picking-off Busch and then setting about to catch Truex.

With 15 lap fresher tyres, Hamlin cut into Truex’s lead. As other pitted and unlapped themselves, Truex lost the edge of his tyres and brushed the fence with three laps to run. Then halfway through the next lap Hamlin got by as a puncture ended Truex’s hopes.

“I drove my ass off, that’s as hard as I can drive,” said Hamlin.

“I love this race track. This is the Southern 500; it doesn’t get much better than this.”

It was Hamlin’s second win at Darlington and like in 2010 he also took the weekend double with Xfinity race as well.

NASCAR’s throwback weekend was another huge success, with a range of paint schemes celebrating the heroes of yesteryear. Hamlin’s car ran the “Flying 11” of modified hero Ray Hendrick who was a legend of short tracks such as Martinsville.

Truex Jr. did score both victories in Stage 1 and 2, and in the process, will take a 15-point advantage into each of the play-off segments of the Chase for the Cup.

Next week the series heads to Richmond; the last race before the Chase and the final opportunity to make the final 16 drivers eligible to win the title.

VIDEO: Hamlin speaks after the race